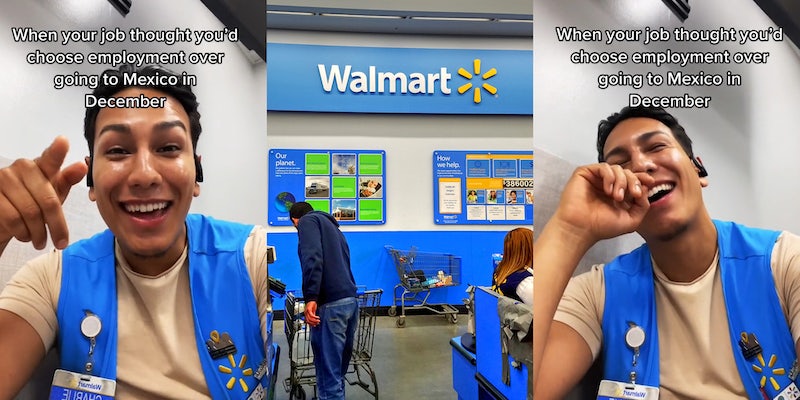 ‘This is why I have a new job every year’: Worker threatens to quit after Walmart refuses to let him take time off for vacation

'I left my job for a whole month and a half one time.'

A Walmart employee went viral on TikTok after claiming he’s going to quit since Walmart refuses to let him take time off for a vacation.

The six-second video features Charlie (@_hernandezcharlie) in his Walmart vest. He mouths Badman Lisa’s popular sound, where she says “you thought I was feeling you,” alongside the sound of laughter. In the text overlay, he wrote, “When your job thought you’d choose employment over going to Mexico in December.”

Charlie elaborates more about this in the caption, “Who else might have to find a new job in December?”

Who else might have to find a new job in December?🤷🏽‍♂️

The video has amassed 646,000 views since it was posted on Sept. 19, resonating with viewers as they shared their experiences with choosing vacation instead of working.

“I’m leaving Sunday for 10 days and I just put down for another 2 weeks in December yesterday,” one viewer wrote.

“Literally me I can’t wait,” a second agreed.

“Im literally about to ask for three weeks off in November,” a third said.

“LMAOOOO I DID THAT TO WALMART THIS PAST WINTER,” another commented.

Other viewers recounted the stories they’ve heard and their own experiences with Walmart’s toxic environment.

“My mom when she came back from Mexico. She had just made the 5yr mark, gave her the certificate and then fired her!” one person shared.

“They told me I couldn’t transfer when I talked about moving LMAO I quit the next week,” a second stated.

“My mom is toxically tied to her job at Walmart. Like she’s been working there for 24 years and yet they still make her work Thanksgiving??? No thank u,” one viewer commented.

“Me but I went to Miami and put in PTO but the DAY I was leaving they said it was denied.. guess who quit in June AND AT WALMART TOO LMAAAO,” another stated.

Walmart is well known for its alleged toxic work environment, with a high turnover rate of 70%. With Amazon and Starbucks workers fighting to unionize, it has inspired many employees in other corporations, such as Walmart to join the fight. In addition, Walmart is known for having numerous lawsuits against them, from labor violations to discrimination to vacation times.