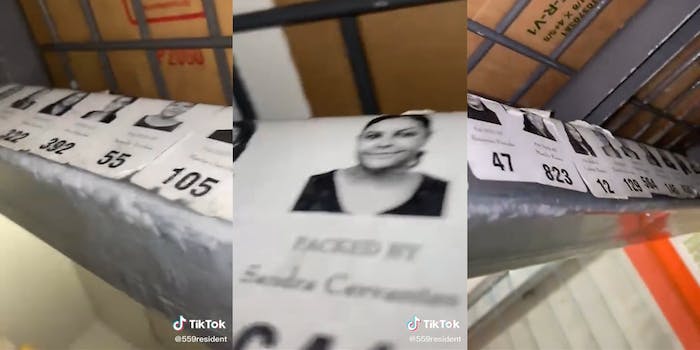 The video alarmed users, but there's a simple likely explanation.

A Fresno-based TikToker has posted what has become a viral video, showing a row of stickers with pictures of women on them lining a Walmart shelf.

The video was posted to @559resident‘s TikTok account on Saturday and has garnered more than 4 million views since. In it, the creator films a Walmart shelf, ducking underneath it to reveal a row of stickers. Each sticker has a picture of a woman on it, with a two-digit or three-digit number under the photo.

“Look at this shit!” the person narrating the video remarks. “There’s fuckin’ pictures of fuckin’ girls on here, bro!”

Then, panning the row of the stickers, the voice continues with, “Fuckin’ serial killer shit!” It ends on a note of wonderment: “What the fuck …”

Some commenters went to the site to theorize about the insidious nature of what the TikToker revealed about the California Walmart. “You just stumbled on a trafficking operation, my friend,” one commenter alleged. “Should have put that on blast.”

Another advised, “I hope you called the police. Something isn’t right.”

Yet another said, “OMG this is trafficking for sure,” adding, “I hope these girls are SAFE.”

But a number of commenters purported to have inside knowledge and swooped in to clarify what the stickers were really all about. The stickers, according to them, are used by Walmart to show who packed certain orders. (A few contended that there were also men sprinkled in among the women.)

“Y’all are bruh,” one commenter observed. “I used to work at Walmart and it’s literally people who packed the packages.” That commenter went on to point out that the stickers include the words “packed by.”

Another pinned it to a company he identified as “Prima,” adding that the company “requires workers to put those on the pallets,” and that “this worker is just collecting them like baseball cards.”

As one commenter noted: “This is sad and scary to even think it could be something bad…it’s all females.”

Another commenter apparently zoomed out and was baffled by the working conditions that even bred this video: “They take a picture of people who packed the packages,” along with a hand-on-face emoji.

The Daily Dot has reached out to the TikToker and to Walmart for comment.