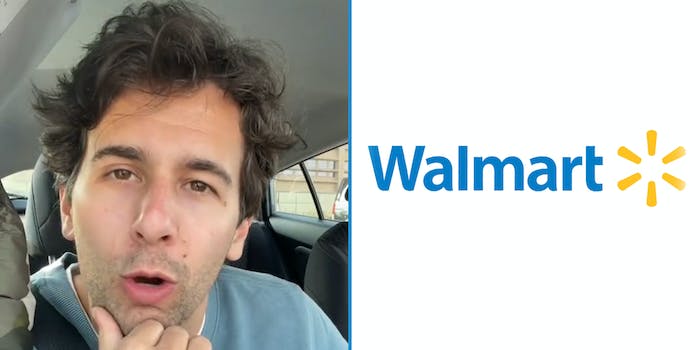 ‘That’s called union-busting, my friends’: Former Walmart employee says he was fired because managers overheard him talking about a union

A former Walmart employee says in a viral TikTok video that he was fired because managers overheard him talking about a union.

The former employee, known as Reider (@reiderrrr) on the platform, sounded angry in his video talking about the termination. He says he has a graduate degree in clinical mental health but still got fired from an hourly position at the grocery store chain.

“First of all, working at Walmart is like microdosing death,” Reider says in the video. “It’s like your parents tied you to the kitchen table, threw a couple Cheez-Its on the ground and said, ‘Hey, do your best. We’re going to Cabo for the month. You’re probably going to die.’ You’re eight years old.”

I got fired from another job heheheh

Before explaining why he got fired, Reider shares examples of what he put up with while working at Walmart.

During his time at the supermarket chain, employees were “getting Covid left and right,” Reider says. Meanwhile, management allegedly never informed other employees of the positive cases, meaning they were often working with infected people.

“I don’t care that most of the employees at Walmart look like they’re going to get Covid and keel over — it doesn’t matter, OK?” Reider says.

Sharing his concerns about the Covid situation, the TikToker says he asked a coworker “What if we unionize?” The employees only talked about unionizing, but didn’t actually do anything, Reider notes.

He then claims that the Walmart he worked at bugged the aisles “for security reasons,” which allowed management to listen in on employee conversations. Management overheard Reider mention a union, so they called him into the office, he says.

But the story they told him was different. Management told Reider he was caught on camera riding a pallet jack around the store, which they claimed was against the bylaws. When Reider asked management to show him the bylaws or the video of him riding the pallet jack, they did neither, he says.

“I got fired for something that’s not a fireable offense — I didn’t even do it,” Reider says in the video. “They fired me because they overheard me talking about a union. That’s called union busting, my friends.”

One viewer urged the TikToker to sue: “You can sue them for this, I know people get sue happy. But you can sue for wrongful termination. They’ll settle.”

“Walmart it’s just an all around horrible place to work. I never work there but I have friends who did and they never stayed more than six month,” one user commented.

Other viewers shared how they got fired or even banned from working at Walmart.

“I was banned from working at Walmart because I told them working in customer service was like working in hell & I quit,” one viewer said.

“They fired me and then sent a letter that costs them $7 by certified mail and put down that I abandoned my job,” another viewer claimed.

One viewer wrote, “I got fired from one of Walmart’s optical plants for not taking my lunch on time even though I couldn’t leave until my replacement was there.”

The Daily Dot reached out to TikTok user @reiderrrr via TikTok comment and to Walmart via media request form.