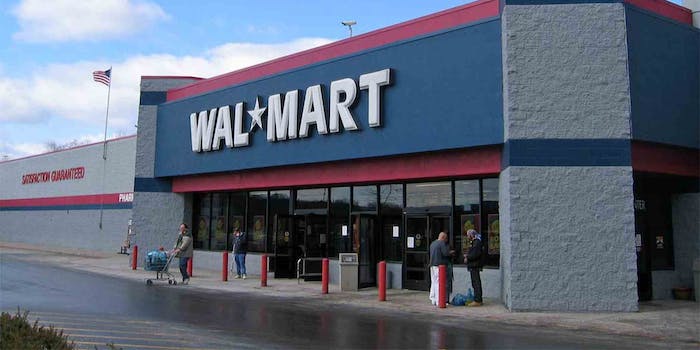 Luckily fellow customer Paige Yore was there to comfort him.

“Treat people like you want to be treated.” That’s the message that Paige Yore was reminded of after witnessing a confrontation between a Walmart cashier and an irate customer that ended with a tragic twist.

Yore was recently waiting to check out at a Walmart in Pueblo, Colorado, when she says she heard the woman ahead of her berating the cashier (who she estimates was an approximately 16-year-old young man) for his terrible customer service.

In a video posted to her Facebook, Yore explains how she eventually stepped in to diffuse the situation: That’s when the young man began sobbing and came around the counter to hug her. When he gathered himself, he told Yore that his mother had committed suicide that morning. “This woman is yelling at me and I don’t even have a mom anymore,” he reportedly said.

Not only was Yore a shoulder to cry on for the young man, she also gave him all the money she had in her purse. Yore often posts inspirational videos on her Facebook, encouraging others to chase their dreams and live their best lives.

The closing words of this particular video are ones to live by. “Some days just suck. And we just have to be thankful to be alive. And treat people like you want to be treated. Don’t lay into somebody like that because you never know what’s going on their life.”

Update 5:56pm CT, Dec. 7: A Walmart public relations rep tells Fox 31 that Yore’s story did not happen as she described. Following a review of the store’s security footage, Walmart says, no such incident appears to have occurred save for what was reportedly mild confusion that sparked from a language barrier.

Moreover, Walmart says the alleged cashier confirmed to his bosses that his mother is, in fact, alive. Yore has yet to respond to these claims.