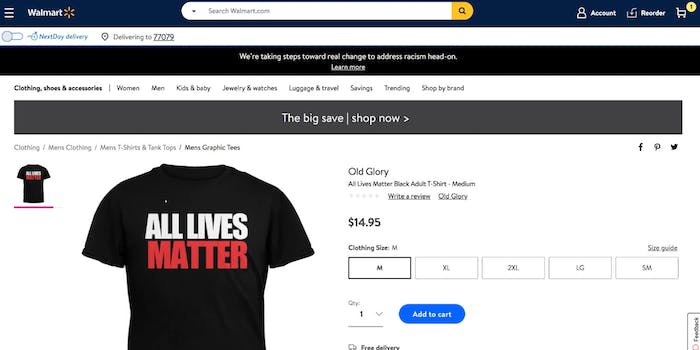 Walmart Canada responded to multiple tweets criticizing the shirts and said the company is looking into the item, which is sold and shipped by a third-party.

The retailer that produces the shirts at the center of the backlash, Old Glory, is based in Connecticut. Its products also appear to be available for purchase in the U.S through Walmart.com.

Walmart did not respond to a request for comment prior to publication and did not confirm if the shirts were sold in stores. @Walmartinc and @Walmart have not tweeted a response to customers asking about the T-shirts.

Other products with the phrase “All Lives Matter” are available on Walmart.com through other retailers. One poster shows an African-American boy behind metal bars and an assortment of clothing items with the phrases from retailer Wild Bobby.

Both Wild Bobby and Old Glory also offer shirts with “Black Lives Matter” printed on them through Walmart.com. Most of the models sporting the clothing appear to be white.

Old Glory also sells gay pride shirts and other graphic T-shirts, some of which also feature a raised fist. Old Glory did not immediately respond to the Daily Dot’s request for comment.

The online criticism comes after Walmart released a statement on June 12 titled “Advancing Our Work on Racial Equity.”

“Black Lives Matter. It is all our responsibilities to embrace that fact in what we say and what we do. There’s no way to live our values if we don’t,” the statement read.

“Walmart’s self-aggrandizing gesture is emblematic of a long-running problem in how corporate America deals with race: McMillon’s pronouncement was a soothing delay tactic that failed to offer any tangible solutions,” wrote Cat Davis, a 12-year employee of the company, and Dorian Warren, president of Community Change, for NBC.

“Walmart’s Black employees cannot wait five years for changes that our communities have been calling for for decades,” they wrote.

Earlier this month, Walmart discontinued its practice of locking up Black hair care products, according to NPR.

On Wednesday, the company announced it would no longer display the Mississippi flag because it contains the Confederate flag, according to the Washington Post.