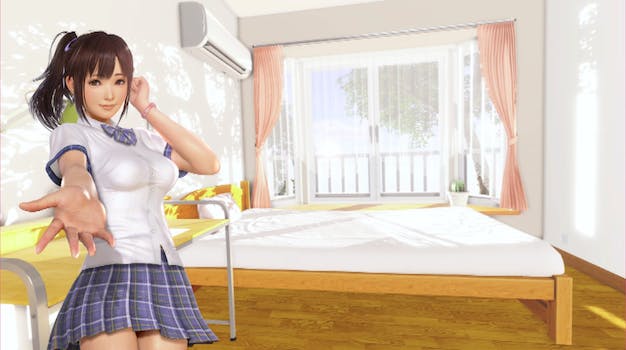 Meet the VR girl-next-door of your dreams.

What is VR Kanojo?

VR Kanojo takes a more romantic route than most adult games. Players live out a variety of scenarios with the doe-eyed Sakura Yuuhi, an adult student with an ample bosom and nothing but you on her mind.

VR Kanojo stands out from Illusion’s Koikatsu Party and Honey Select 2 Libido because it lacks broad customization options. Sakura is a preset character with her own personality and interests, complete with quirks, tastes, and preferences. Players can’t customize Sakura’s face or body, but they can change up her appearance through various outfits. This includes everything from fancy dresses and French maid wear to casual, around-the-house T-shirts.

VR Kanojo takes a simple and direct approach—there’s no in-depth storyline, just endless days and nights to hang out with Sakura and indulge in whatever urges arise.

Enjoy heart-pounding quests like “studying,” in which you essentially watch Sakura slack off around the bedroom, just like a real schoolgirl. Other activities allow players to watch their VR companion work out, sleep, and bathe. You can often participate in these activities as well—but don’t get too handsy before Sakura gives the go-ahead.

If you play your cards right, Sakura will be swept up by your tailor-made charm in no time, allowing things to escalate to a level inappropriate for young audiences.

VR controllers let players move their hands in-game, which intensifies their direct interactions with Sakura. The game introduces various scenarios for putting this mechanic to good use, allowing players to stroke, massage, wash, and generally put their hands all over their virtual companion. If you’re struggling to adjust to the virtual reality controls, Illusion also provides a handy manual to help players get started.

Is VR Kanojo on Steam?

VR Kanojo is available on Steam for $49.99. You’ll need to own an HTC Vive, Oculus Rift, or Windows Mixed Reality VR headset to play the game natively, although Oculus Quest owners can also play the game with Oculus Link or Virtual Desktop. Motion controllers are recommended to ramp up the immersion.

If you’re unsure whether your PC can handle VR Kanojo, download Illusion’s VR Benchmark Kanojo. The software will put you through a quick gameplay demonstration, making sure Sakura isn’t too much for your gaming computer.

Steam is careful about its adult content, so you’ll have to jump through a few extra hoops to play VR Kanojo uncensored. Once you’ve purchased and downloaded the game from Steam, head over to the game’s website. There, you can snag the official 18+ patch, which will unlock all the sordid content this game has to offer. You can also download a demo version of the game directly from Illusion’s website with NSFW content already enabled.

If the official patch doesn’t quite live up to your expectations, the Hongfire patch has your back. This add-on unlocks all the 18+ content and offers fan translations, the most commonly used plugins and mods, and all of the current updates. Think of the patch as a one-stop shop for everything VR Kanojo needs.

You can track down the Hongfire patch on Patreon, where the creator—ManlyMarco—breaks down its download and installation process.