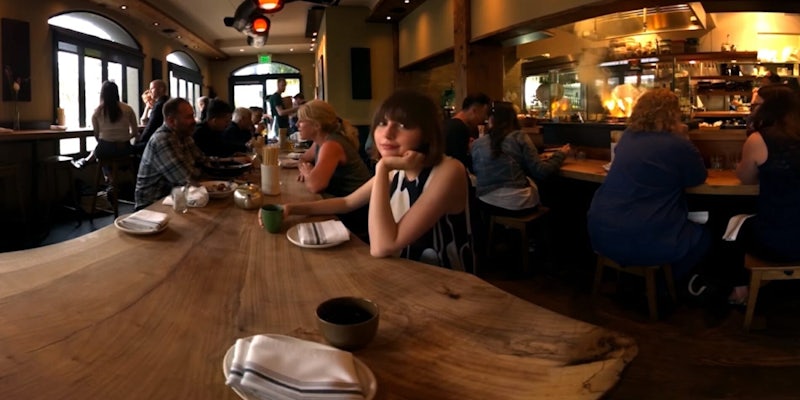 VR film pulled from SXSW after star says she didn’t sign release, was pressured into nudity

'He violated a clear agreement and several industry norms.'

Adult film creator Liara Roux said she was approached by director Mike Jacobs with an idea last year: The two would sit down for an interview about life as an escort for a VR film project, breaking down society’s misconceptions about sex workers. It sounded affirming. And after months of negotiations, it seemed like Roux and Jacobs had finally reached a date and were ready to shoot.

But things seemed off, Roux said, when she met with Jacobs for the film. In an interview with the Daily Dot, Roux explained how Jacobs repeatedly asked her questions that made her uncomfortable on camera, used off-camera negotiations in the film’s final cut, and even made her feel “pressured” into performing a nude scene that became central to the film. It was far from a sex-positive experience.

“He would touch me in ways that weren’t particularly sexual but made me feel like he was treating me in a non-professional way,” Roux told the Daily Dot. “Guiding me with a hand on my back or touching my arm while talking to me. He did not do any of this behavior with the other women on his set.”

But she said the biggest red flag wasn’t the shoot, it was the contract surrounding it—or lack thereof.

Roux said Jacobs never sent her a release to appear in the film before the shoot, nor did the two come to a legal agreement after filming. At the time, Roux gave him a pass, expecting her legal team could help her draft a contract that worked for both parties.

While she waited, however, she didn’t expect Jacobs would take the film to South by Southwest, one of the U.S.’s biggest art festivals, and bill it as GFE, short for “girlfriend experience,” a reference to a form of sex work where there is usually more emotional interaction than traditional escorting. Roux said it wasn’t until a fan shared an article about the film on Reddit that she found out the movie already went public.

“What happened this week is kind of inexplicable. People simply don’t screen films, especially with nudity, without a release,” Roux said. “No professional would do that and it would obviously result in a strong legal response from the talent. Which is exactly what happened.”

Roux had previously seen a rough cut of GFE and expressed concerns with her depiction, according to email transcripts between Roux and Jacobs obtained by the Daily Dot. The film differed significantly from what she expected, the emails showed: Jacobs pitched the short by comparing it to a documentary, but the final version was missing huge chunks of interview footage and conflated escorting’s emotional labor with sex. It was also largely centered around the nude tease scene that Roux said she felt pressured into performing. So she refused to sign an agreement to appear in the film, which has been confirmed by her lawyer.

Yet GFE made it to SXSW anyway, and Jacobs billed the film as, in so many words, a feminist work. He told Engadget that GFE is “demystifying escort work” and “bringing a sense of empowerment to escorts,” but Roux turned to Twitter and disagreed, arguing that GFE’s appearance at SXSW violated her consent by using shots she did not agree to and cutting her “out of the feedback process” to “suggest a narrative not approved by, like, the actual escort” starring in the film. She wasn’t even identified in the final cut, either, she tweeted Thursday. The email exchange also revealed that prior to the screening, she wanted the film recut with credit given for her performance.

“It’s not that he tricked me into anything, it’s that he violated a clear agreement and several industry norms,” Roux told the Daily Dot. “He was not amazingly clear in his communications, but I was clear in mine and in our written records he accepted that.”

1/2 – Don't want to talk too much before consulting further with legal, but just found out a director I collaborated w/ on a very intimate VR project (terms still in negotiation with our legal teams) released it without my consent and didn't credit me. I feel incredibly violated.

Choice Bit: Me talking about emotional labor while he puts the voiceover on video of me in my underwear. I told him this was absolutely unacceptable in the first cut I saw and that it suggest emotional labor is an euphemism. It's not. I didn't want to talk about sex in this video

The film has since been voluntarily pulled from SXSW by Jacobs after he received a cease and desist letter from Roux, according to Engadget. SXSW later confirmed that to be the case with the Daily Dot, and Jacobs also insists he removed the film voluntarily.

“She agreed to participate in an immersive art project,” Jacobs said in a statement to the Daily Dot. “I’m now aware she doesn’t like the finished product and given her displeasure I decided to remove the film from the floor.”

But it’s still unclear why Jacobs decided to bring the film to the festival without a signed contract agreement. Jacobs’ lawyer George Rush told Motherboard that Roux “consented to be filmed and was paid to be filmed,” and so “that usually suffices.” Roux’s lawyer, Alex Austin, disagreed, pointing out that her client “clearly refused to sign” a release for her appearance and that Roux and Jacobs were still negotiating terms behind an agreement when the film suddenly appeared at SXSW.

In fact, Rush’s defense for his client’s behavior shocked Austin. While talking with Rush, Austin said Jacobs’ lawyer made “the unfortunate suggestion that because Ms. Roux is a sex worker and got paid for her time that this should all be fine,” according to Austin’s paraphrasing of their conversation. This upset her tremendously.

“Mr. Rush later apologized and I accepted his apology,” Austin said to the Daily Dot. “However, it does concern me that kind of thinking continues in our industry.”

Roux stressed she had a lot of control over the film’s production, just not in the editing. But if she was in complete control, she knows how she would make the film differently.

“I’d like it to be more immersive, more interactive, and go deeper,” she said. “In my interviews, I talked a lot about things people really don’t know about our business. He cut a lot of that out in favor of soundbites that sounded more sensational or sensual.”

“Oh,” she continued, “and I would light it better. Yeesh.”

Correction: A previous version of the headline stated that Roux did not consent to the nude scene; however, the problem was that she did not sign a release for Jacobs to use it. We regret the error.