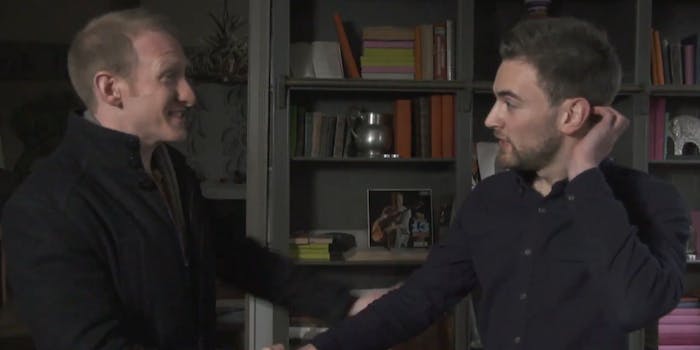 Is this the first time social media helped someone reunite with the person who saved their life?

Earlier this month, mental health vlogger Jonny Benjamin put out a call to find “Mike,” the man who stepped in when he was contemplating suicide six years ago. At age 20, Benjamin had been diagnosed with schizoaffective disorder, and was considering taking his own life by leaping from London’s Waterloo Bridge. He was talked down by a good stranger who encouraged him to step back from the edge and have a coffee. Since then Benjamin has turned his life around, and this year he decided to try and track down the good samaritan who changed the course of his life.

The only problem was, Benjamin couldn’t remember anything about him except that his name, perhaps, was Mike. The only viable option was to turn to social media and hope that the story would go viral. Luckily, it did.

As a result of his YouTube videos and the #FindMike campaign on Twitter and Facebook, Benjamin did finally managed to find Mike. Whose name, it turns out, is actually Neil Laybourn. In this heartwarming video, we see them meet for the first time in six years.

Laybourn knew as soon as he heard about the campaign that he was “Mike,” and got in touch straight away. The pair plan to stay in touch in the future.

As Benjamin says at the end of the video, “I think everyone could do with a friend like Neil.”