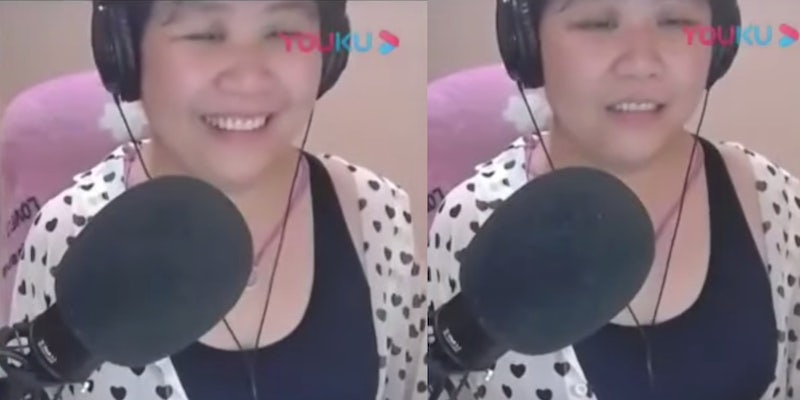 A Chinese vlogger lost viewers from her live stream within minutes when a glitch revealed she was using filters to hide her age on social media, according to numerous reports.

Qiaobiluo Dianxia sold herself as a singer and earned thousands of dollars from her loyal fans, according to Global News. She was “worshipped” and referred to as a “cute goddess.”

But the 58-year-old vlogger, who went by Your Highness Qiaobiluo on Chinese social media site DouYu, would upload her images and short videos on social media with a filter that made her look younger, Kotaku reports.

The truth about her online persona came crashing down last week during a live stream session with another user, Qingzi. According to Kotaku, Dianxia was covering her face with a block of an anime cartoon so as not to show her face. She’d previously taunted her followers that she’d show her face only if she received money.

She immediately began receiving donations, with the top donation being almost $6,000 from one donor, according to Global News.

But due to a glitch, the cartoon box disappeared from her face without her realizing. Even though her co-host Qingzi noticed, she appeared unsure what to do as the conversation dragged on, Kotaku reported.

Dianxia only realized what happened when she began losing fans from her VIP section. Many fans, mainly men, were disappointed and unfollowed her, and some even withdrew their transactions, according to BBC.

Since the story went viral, Dianxia received some backlash for being a fraud but gained more followers. She now has more than 650,000 followers, according to BBC, and some fans are calling for the protection of “Granny.”

Dianxia appears unfazed by the ordeal. She is back to her regular streaming schedule and is now working on a rap song. It seems grannies don’t have time to brood over superficial fans.