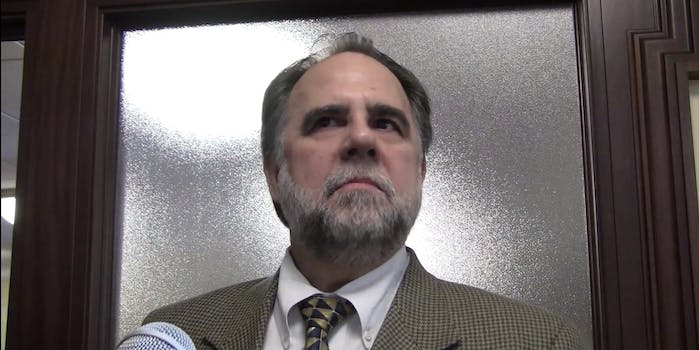 Idaho lawmaker has no idea how vaginas work

America has a new poster boy for sex education.

A woman cannot swallow something and make it come out of her vagina. This fact has apparently eluded Republican state Rep. Vito Barbieri for all 63 years of his life.

Barbieri received an important lesson in the functions of the human reproductive and gastrointestinal systems on Monday during a meeting of the House State Affairs Committee. This is a good thing, because it appears that he may have fallen asleep during one or more of the biology classes he must have attended before obtaining a law degree from Western State University.

While questioning Dr. Julie Madsen, who was testifying against a bill that would ban doctors from remotely prescribing abortion-inducing medication, Barbieri asked if it were possible for a patient to swallow a tiny camera in order to conduct a gynecological exam. In other words, can a woman swallow something and have it reach her vagina?

In other @vitobarbieri news, the Assemblyman reminds sexually active teenagers to eat the ENTIRE can of spermicide…

Barbieri’s question is reminiscent of a South Park episode in which Cartman postulates that food inserted into an orifice of his body, namely the anus, will evacuate through his oral cavity.

For the record, Barbieri sits on the board of a crisis pregnancy center in northern Idaho.

Dr. Madsen informed Barbieri that swallowed pills do not end up in the vagina. This has been noted prominently—in a phrase that can only be described as wholly accurate—on Barbieri’s Wikipedia page, where it could remain for the rest of his life.