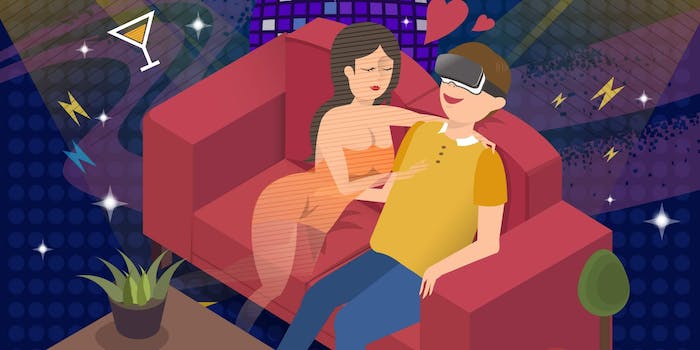 Here’s everything you need to know about virtual reality sex

The future is here, and it's teledildonic.

Call it a cyberpunk dystopia or a sci-fi utopia—either way, we’re living in the future. Virtual sex is a thing now. And it’s given birth to a new form of adult content that, for lack of a better term, we’ll just call virtual reality sex.

What is virtual sex, and what does it have to do with VR sex?

“Virtual sex” may sound like a novel idea, but it’s just another term for something most of us are already familiar with: cybersex.

Traditionally speaking, virtual sex is “any kind of sexual activity that people do with/on the internet,” according to Planned Parenthood Toronto’s Teen Health Source. This ranges from sexting and erotic role plays to phone sex and online kink play. However, the advent of sex tech, advanced artificial intelligence, realistic adult video games, and virtual reality has complicated “virtual sex” as a term. One paper for the International Conference on Love and Sex with Robots equates virtual sex with human-robot relationships in both the real world and in virtual ones. Wikipedia now defines virtual sex as “sexual activity where two or more people—or one person and a virtual character—gather together via some form of communications equipment” for sexual interaction. That change only dates back to December 2018.

So how can you have VR sex?

In its simplest form, VR sex requires three things: a virtual reality device, interactive media, and something that you can interact with (or something that can interact with you). If you have a VR headset and can touch or manipulate onscreen content—preferably through controllers—then you have all you need to experience VR sex. Even a mouse and keyboard will do, although at this rate, you soon won’t need anything else but your headset. Oculus, for example, is already working on hand-tracking mechanics for its standalone Oculus Quest.