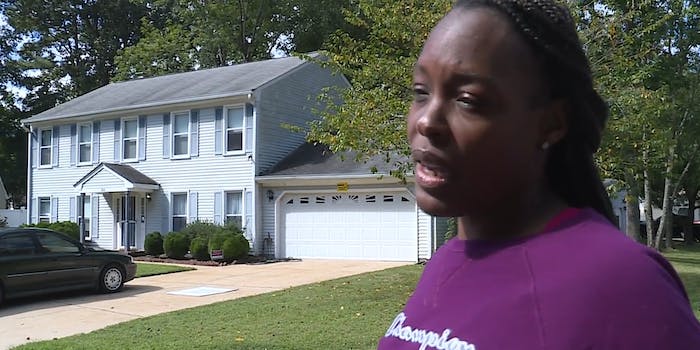 ‘How is this not actionable?’: Police refuse to charge neighbor that harasses Black family with N-word, monkey noises, sparking outrage

They claimed it wasn't 'criminal behavior.'

A Black Virginia Beach family have been subjected to targeted, racist harassment by a neighbor, but the police say their hands are tied as the city attorney and Virginia magistrates both say it doesn’t constitute a crime.

Every time Jannique Martinez, her husband, or their children leave their house they’re greeted by flashing lights, recordings of monkey noises, and racist comedy skits featuring the N-word playing on their neighbor’s lawn. The same happens when they return at the end of the day, and according to Martinez, they’re not the only family being targeted by this man.

“When the sensors are activated, loud music begins to play,” Martinez told CNN. “He switches the music based on the family that is activating the music.”

The surveillance and harassment had been going on for over nearly five years when Martinez and her husband noticed that their own leaving and arrival music had been replaced with monkey noises. Deciding that enough was enough, they reported their neighbor to police, at which point things escalated. The neighbor then began to play racist skits using the N-word.

While the police have acknowledged that the neighbor’s behavior is “appalling and offensive,” they say it does not meet the standard for criminal behavior. This has come as a surprise to many people, given the existence of various noise ordinances and the ease and frequency with which Black people are overpoliced by them.

Some have pointed out that there are local ordinances that make the neighbor’s behavior a crime—a code on disturbing the peace generally and the city’s much mocked ban on swearing and abusive language.

The city’s apparent refusal to act in this case has led to accusations of racial bias in enforcing.

People have also been responding with calls for the relevant officials to be recalled or fired, and a call to action for citizens to start calling the police and city authorities to pressure them to act.

Meanwhile, the Virginia Beach city authorities are busy trying to convince Pharrell Williams to continue holding his Something in the Water festival there. Williams has announced that due to the city’s “toxic energy” and mishandling of his cousin Donovon Lynch’s murder they won’t be back next year, or possibly ever again.