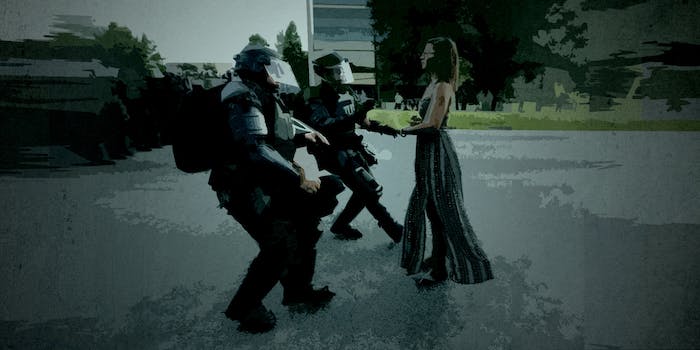 Over the weekend, protests broke out in Baton Rouge, where last week local police killed Alton Sterling, an unarmed black man. During these protests, police officers showed up looking like RoboCops, and one powerful image taken by Jonathan Bachman is going viral, as people recognize just how militarized the police can be.

Baton Rouge PD looks ridiculous. I never wore so much armor in combat. This is their own community. (Photo: Reuters) pic.twitter.com/clCFFyD6jx

Baton Rouge PD: "How many space marines should we deploy to deal with the young woman in a dress? Ten? Fifteen?" pic.twitter.com/80vKOuCkuG

In the image, a black woman wearing a sundress peaceably stands in front of three heavily-armed policemen who are actively coming for her.

Though many places originally identify the police as Baton Rouge PD, many are reporting the heavily armored officers are Louisiana State Police. Bachman described the scene at the protest for The Atlantic. “It wasn’t very violent. She didn’t say anything. She didn’t resist, and the police didn’t drag her off,” said Bachman. “It’s representative of the peaceful demonstrations that have been going on down here. I understand that officers have been hurt in other cities, but down here it’s remained peaceful.”

According to the ACLU, the ongoing militarization of police—the trend of officers to view members of their community as enemy combatants rather than, well, members of their community—is extremely harmful. “Sending a heavily armed team of officers to perform ‘normal’ police work can dangerously escalate situations that need never have involved violence,” it writes. “The change in equipment is too often paralleled by a corresponding change in attitude whereby police conceive of themselves as ‘at war with communities rather than as public servants concerned with keeping their communities safe.’”

The woman in the photo has been identified at Iesha Evans, a licensed practical nurse, who has written about her experiences.

The Daily Dot has reached out to Evans—who wrote on Facebook “I am here. I would like the opportunity to represent myself!”—but has not heard back as of this posting. Evans was arrested, along with 101 others on Friday.

In a press release titled “A Tale of Two Protests,” the Baton Rouge PD spoke of one protest on Saturday organized by “local community leaders” that was peaceful, and the other, also on Saturday, at Baton Rouge Police Headquarters “organized by individuals from outside our Baton Rouge community,” that resulted in arrests and violence.

However, there are many reports of police being the instigators of the violence, including at a protest on Sunday, where police dragged protesters from private property (where they had been given permission to protest by the owner), and then arrested for obstructing the road.

.@Deray Mckesson speaks after being released from jail: Baton Rouge PD "only people that were violent last night."https://t.co/DV3Pul4o3J