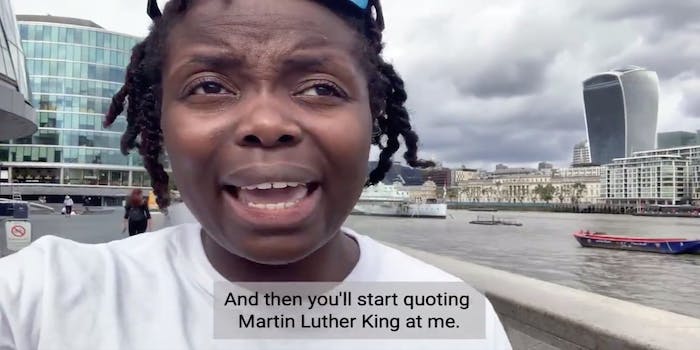 ‘You’re quoting Martin Luther King, someone that you lot shot in the face.’

In August, a video from Kelechi Okafor went viral on Twitter for her cultural analysis of responding to racism with violence. On Wednesday, the video shot to popularity again because of Breonna Taylor.

With over 883,00 views, the nearly 4-minute clip explores the popular phrase “violence isn’t the answer.” Usually in response to a violent act being done against a person or community-at-large, Okafor notes that the idea has gained popularity both in real life, social media, and in news coverage.

The actress begins the video with a story about a racist who was recently punched while riding the tube. Okafor, who is based in London, then states that many of her followers reached out amid the news to gather her perspective on the matter. “Surely this isn’t the way we handle racists,” someone asked her. “Well, is violence not the answer?” Okafor asks rhetorically.

Okafor explores the violent history of the Western world that has transcended into modern-day, making it known that it’s a natural response to react to violence, with violence, in a world that has always used violence to gain power over others. She then explains that racism, while not a new phenomenon, is being publicly supported and causing people to feel they can act outlandishly without any consequences. “People are becoming emboldened by bigotry, seeing people like Trump and Boris leading countries, Bolsonaro leading countries. ‘So you know, racism, bigotry, all of this works. So why don’t we do it, too?’”

The points made in Okafor’s video are still relevant a month after the post was originally made.

Yesterday, the news of Taylor’s murder case led many to take the streets across the United States in protest of an unjust system that did not arrest any of the police officers involved in her slaying. While most protests began peacefully, violence broke out as police tried to clear protesters out.

“If you chat shit, expect to get banged in the face,” Okafor continues. “I’ll be damned if every time we as Black people have to face violence, other people who have the most power will turn around and go ‘Oh violence isn’t the answer.’” She then brings up how these same people start quoting Martin Luther King, who was assassinated for leading a peaceful racial justice movement. “It’s a lie that we are going to be able to change society by just being meek and mild and waiting for the change to happen. Change happens when you make it happen.”

Okafor makes it clear that she isn’t trying to incite violence with her video, similar to how many activists have spoken at the beginning of protests, but instead, she isn’t going to allow someone to be racist toward her and just let it pass: “You want to believe that in the face of violence, Black people should be subservient all the time and carry you with all of your burdens. I will stand by the fact that if you want to be racist, whether overtly or covertly, be prepared for what comes after that.”