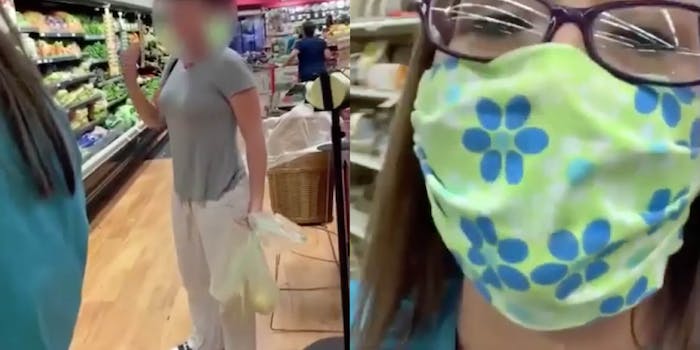 The woman allegedly called the police on the medical workers.

As the coronavirus continues to wreak havoc around the world, everyone is doing their best to thank those on the frontlines. New Yorkers are giving a round of applause from their balconies for the healthcare workers at 7pm every day. People are also suggesting to forgive medical personnel student loan debt as a way to thank them for their service. But one woman in Florida seems to be less than forgiving.

In a video, the woman can be seen telling two medical workers that they are spreading the virus by walking around Winn Dixie, a grocery store, in their scrubs.

“If you work in a hospital—” the woman says, as the person filming, Juliann Roberts, cuts her off and says, “We don’t, we’re audiologists. We work with seniors.”

That didn’t stop the woman from continuing. Roberts again interjects, saying, “We just left work and are picking things up for our families.”

The shopper then claims it is “illegal” for Roberts to film her. And Roberts defends herself by saying, “We’re in public honey.” Then Roberts’ friend, who she later identifies as Melanie, calls the woman “insane.”

Roberts then reminds the woman that they need to maintain a distance of at least 6 feet from one another, saying, “Social distancing. Get the fuck away from me.”

The woman can then be seen pulling out a phone. In the rest of the video, after the women are away from one another, Roberts further explains the incident and says that the woman called the police on them for scaring the public by wearing scrubs. No one was arrested.

Fox 35 reported that store management eventually stepped in, asking the women to stay on opposite sides of the store.