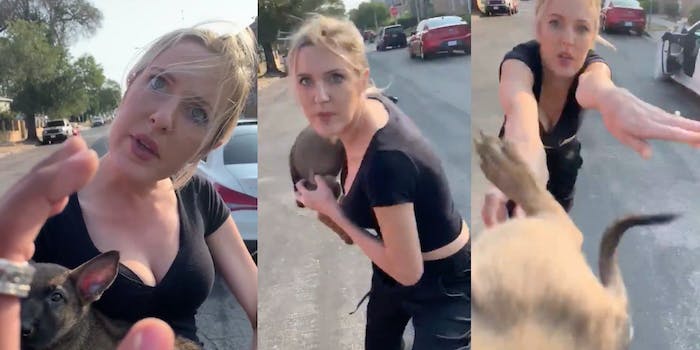 A racist woman threw her dog at a Black man. When he rescues it from her, she accuses him of ‘stealing’

In the video, the dog runs to the man for refuge, letting out repeated yelps.

A woman in California turned her dog into a weapon during an altercation with a stranger. When the man rescued the dog from her, she accused him of “stealing” it.

A video of the incident was posted to Twitter by @Mulaflare, the man on the receiving end of the woman’s attack, on Oct. 9. When the video starts, the two are already in mid-conflict, with the woman aggressively walking toward the man, who is filming her. She is using one arm to hold what is apparently her dog.

“Why you holding the dog like that?” the man asks her, laughing.

Even though he is away backing away from the woman, who is incoherently rambling, she continues to walk toward him. “You got me in the middle of the street,” he tells her, before asking if she is on drugs.

She then goes to hit him, and he blocks her from doing so, still laughing. “Back up,” he pleads with her. “Let me get back in my car.”

“You’re Black,” she says, seemingly as an insult.

He asks her to repeat herself. “I said, you’re Black,” she responds.

“So what if I’m fucking white?” she responds.

He reminds her that she is the one who brought race up, not him. “You racist bitch,” he says.

She then asks him where he is “from,” making the assumption he’s not from California, while she is. The woman goes to kick him, before incoherently asking him about the Illuminati.

She then forcefully throws the dog at him as it lets out a whine. The dog slams into the man before landing on the ground. It then runs to the man for refuge, letting out repeated yelps.

“What the fuck,” he says. “Get the fuck outta here, you dumb bitch.”

The man slightly bends down to comfort the dog. “Woah back up. This not your fucking dog,” he tells her as he scoops up the dog in an apparent attempt to rescue it from her.

She then claims to have mental health issues and accuses him of stealing the dog.

“Idk what’s goin on but I got a new dog,” the man captioned the video on Twitter. He is now posting updates to his Instagram Story, letting viewers know he kept the dog and that “she’s safe” and “happy” now.

The Daily Dot has reached out to @Mulaflare.