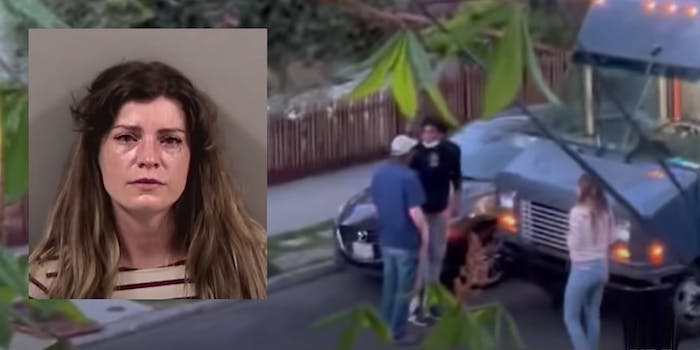 Her boyfriend allegedly blocked the Amazon driver's vehicle so that he couldn't leave.

A California woman is facing several hate crime charges after a video showed her hurling racial slurs at a Black Amazon driver.

The woman, 35-year-old Berkeley resident Julie Walrand, was taken into custody in April after confronting the driver, who she reportedly accused of speeding.

The Amazon driver, identified by KRON4 as Kendall McIntosh, said he believes he was initially followed by Walrand and her boyfriend because of his race.

While being followed, McIntosh said that Warland jumped into his vehicle and attempted to take control of the steering wheel two times.

After stopping and exiting his delivery van, McIntosh said he was immediately confronted by Warland and her boyfriend.

“That’s when the harassing started happening,” McIntosh added. “I was just trying to do my job and she wouldn’t allow me to, she closed both double doors in the van I was trying to leave out of.”

The incident was captured on cellphone video after nearby neighbors overheard the commotion.

McIntosh said despite his best efforts, he was unable to leave after Warland’s boyfriend went and stood behind his vehicle. Throughout the entire altercation, McIntosh said he was subjected to numerous racial slurs, including the N-word.

McIntosh noted that one of his biggest concerns was the possibility that police could arrive on the scene and target him instead of Warland.

“What constantly was running through my mind was, you know, it could be me in handcuffs instead of her,” McIntosh said. “If there wasn’t a video, it wasn’t being recorded, she probably could’ve gotten away with saying this.”

Warland has reportedly since been charged with battery, false imprisonment, and several hate crimes.

Warland is the second person to be arrested for a hate crime in Berkeley in April.

The Daily Dot has reached out to the Berkeley Police Department.