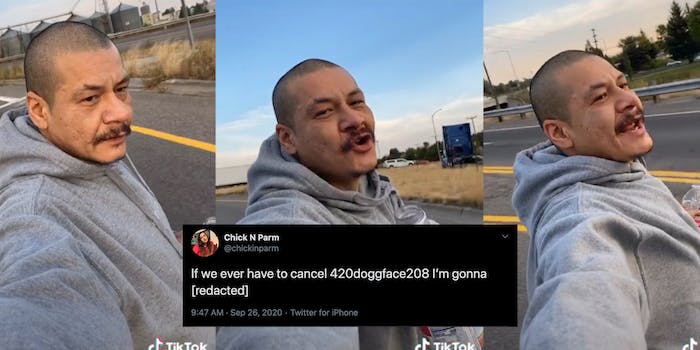 Viral skateboarding TikToker raps N-word in surfaced video, sparking debate on whether he should be canceled

After blessing the internet with one of the year’s “best vibes” in the form of a TikTok skateboarding down a highway and drinking Ocean Spray Cran-Raspberry juice as Fleetwood Mac’s “Dreams” played in the background, user @420doggface208 is now at the center of a Twitter debate. A newly surfaced video shows the skateboarding TikToker using the N-word in a rap song, which has sparked controversy as several netizens have called for him to be canceled.

Following the popular TikTok video, @420doggface208’s quickly became an internet favorite. The video was viewed over 12 million times, and he has since garnered 2.5 million followers on the platform. It also started a trend of users copying his video that even the CEO of Ocean Spray partook in. Not only did the beverage company gift him a brand new truck off of the clip’s strength, but his usage of the Fleetwood Mac track from the 1970s catapulted the song into Spotify’s top 100 charts for the first time ever, eventually also going No. 1 on iTunes’ streaming charts as well.

In the video, the man can be heard rapping along to lyrics from a song that includes the N-word. The newly resurfaced video shared on Twitter Tuesday has sparked debate online about whether the footage is cause for cancelation, despite his previously positive internet presence and his background as an allegedly homeless Indigenous man.

“Please don’t say nothing to me about this man,” a user wrote in the caption of the controversial video.

In one reply, another user pointed to the intersectionality of the man’s identity as a pass for letting the video slide. “Bro, he’s homeless and native american. fuck kinda power or privilege does he have over me where he can’t sing to a song?” they wrote.

Another user corroborated the sentiment, saying, “Go ahead and cancel me too, i was once ignorant of how singing it in rap songs was still offensive. i was once uneducated as well, as most people are. if y’all spent this energy educating others when they’re ignorant instead of putting them on blast we would make more progress.”

While his usage of the N-word has gone widely defended, others online disagreed, with many stating that being homeless and Indigenous are not just excuses for using a racial slur. “If you’re not Black you can’t say the n word it’s really that simple,” wrote one user.