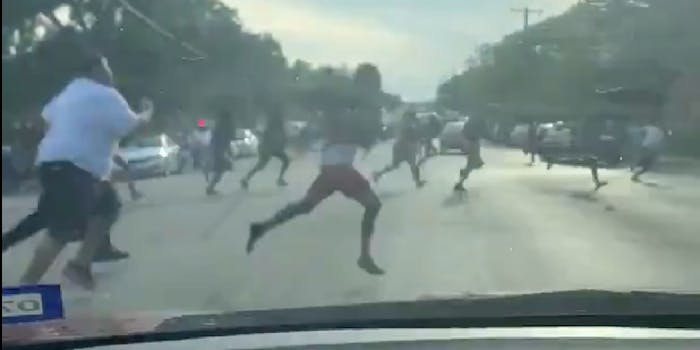 At least five people were shot.

At least five people were reportedly shot at a gathering of at least 400 people at a park in Texas on Sunday.

The incident took place at the Village Creek Park on Sunday in Fort Worth, Texas, and it’s still unclear why so many had gathered, BuzzFeed News reported.

Witnesses reported hearing about 30 rounds of gunfire, according to BuzzFeed News, after what they say were fireworks in the park.

A local NBC affiliate reported on Monday that the crowd was about 400 people, even though previous reports estimated about 600 people present.

Five officers were at the scene when the shooting began, NBC reported, and they reportedly tried to break the crowd up using sirens.

Video shared on social media shows scores of people running across the street, rushing to get away as gunshots are fired and sirens blared. Some even jumping in front of cars.

Two of those injured are in critical condition, according to NBC.

Texas, like a few other states, lifted some lockdown restrictions, opening up public places such as malls, libraries, and museums to operate at 25% capacity. Meanwhile, outdoor activities such as golf and tennis are allowed for groups of four people maximum.

Texas has reported more than 40,000 cases of the coronavirus so far with more than 1,100 deaths as of Monday.