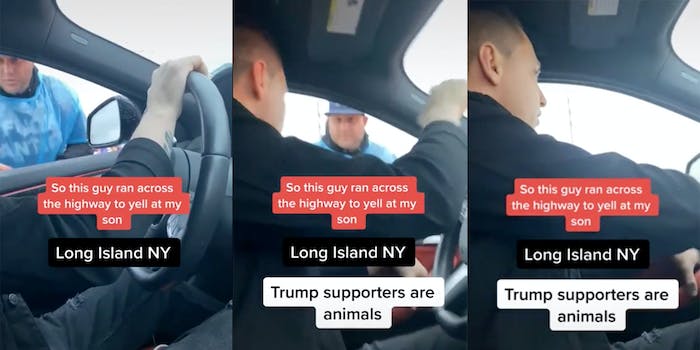 'Are you excited to vote for Joe Biden? The answer’s no.'

A video that was upvoted more than 65,000 times on Reddit shows a President Donald Trump supporter approaching a New York man and berating his choice of presidential candidate at a red light.

The video shows Jared, 31, sitting at a red light with his girlfriend on Long Island, New York, when a man wearing a “Fuck antifa” T-shirt and rain poncho approaches them and yells through the car window.

Jared told the Daily Dot in an Instagram message that his car has a “Biden 2020” bumper sticker.

“Are you excited to vote for Joe Biden? The answer’s no,” the Trump supporter says to Jared, who’s sitting in the driver’s seat. From behind the camera, in the passenger seat, Jared’s girlfriend responds, “Yes. Very excited.”

“You know he’s a pedophile,” the Trump supporter continues. “You know his son’s a pedophile.” In October, conservatives perpetuated a conspiracy theory that Joe Biden’s son, Hunter Biden, owned a laptop that contained photos of him abusing underage girls.

Jared’s girlfriend then says, “Trump is a pedophile. Pussy grabber.” The comment refers to a tape published in 2016 in which Trump was recorded saying that as a “star,” he can do “anything” with women, including “grab ’em by the pussy.”

The Trump supporter continues, “You wanna be owned by China? Is that what you want? Because that’s what you’re gonna get.”

Speaking for the first time in the clip, Jared says, “Listen, it’s my opinion, it’s your opinion.” The Trump supporter then calls Goldberg and his girlfriend “anti-American” for voting for Biden.

But Goldberg’s girlfriend has the final word: “No we are not anti-American,” she says. “We have multiple parties because it’s a democracy.” Jared then drives away from the man.

Jared’s mom, TikTok user @sasssysue, shared the video with her 16,000 followers. “It was very disgusting how that man spoke to my son and his girlfriend and the way my son handle that was superb,” Sue told the Daily Dot in an Instagram message.

Political tensions and allegations of voter intimidation have ramped up in the lead-up to Election Day. Pro-Trump caravans halted traffic in multiple cities over the weekend, and one viral clip shows a Trump supporter beating a man who allegedly said “fuck Trump.”

Jared told the Daily Dot that he’s “curious” to see how Trump supporters react—no matter the outcome of the election. “We all have opinions and we are entitled to voice them without being attacked,” Jared said.