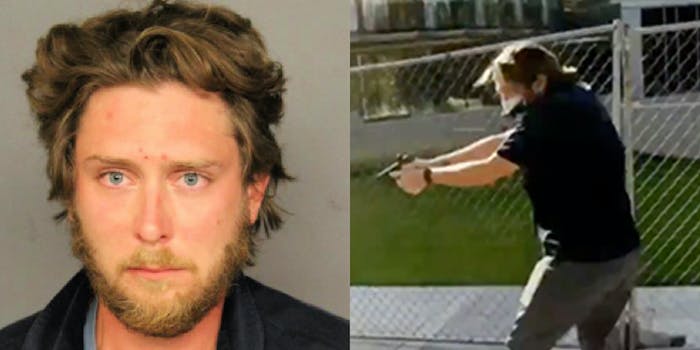 Rumors spread that the security guard was affiliated with antifa.

Video from a right-wing “Patriot Rally” protest and a counter-protest, the “BLM-Antifa Soup Drive” in Denver, shows a private security guard allegedly shooting and killing a man identified as 49-year-old Lee Keltner, according to the Denver Post.

On Sunday, Denver police said in a statement that the suspect, 30-year-old Matthew Dolloff, was being held for investigation without bond in connection to the shooting that occurred near the Denver art museum on Saturday. Dolloff could face a charge of first-degree murder in connection with the shooting.

Dolloff was working as a contracted security guard for Denver’s station 9News, providing protective services to reporters and other news staff on the ground at the dueling protests, the station said in a statement. “It has been the practice of 9NEWS for a number of months to contract private security to accompany staff at protests,” the station said.

According to the Denver Police Department, as the protests were dispersing around 3:50pm, a “verbal altercation” between two parties broke out. Photos and video shows an altercation between the suspected shooter and the victim, who wears bikers’ shirt that says, “BLM your fucking right Bikers Lives Matter,” BuzzFeed reports.

A video taken moments before the shooting shows the victim and a group of right-wing protesters going back and forth with a man wearing a “Black Guns Matter” shirt. The man can be heard saying “Mace me motherfucker” when the victim walks away from the group. A gunshot is heard seconds later.

Video and photo show that after a scuffle, the victim reached out and slapped Dolloff across the face. At that point, the victim sprays the man with what appears to be pepper spray. In nearly the same instant, Dolloff pulls out a gun and fires it at the victim, who died moments later.

“A firearm was discharged, an individual was shot and later pronounced deceased,” said Denver Police Division Chief of Investigations Joe Montoya, adding that two guns with unconfirmed owners were recovered at the scene.

The Denver Police Department wrote in a tweet that the shooter had no affiliation with antifa and was fulfilling his job as a hired security guard.

“Immediately following the incident, rumors were circulating regarding the suspect’s affiliation with a particular group. Investigators are unaware of whether the suspect is personally affiliated with any political organization,” the department wrote.

Denver police said no other suspects are being sought in connection to the incident and that the investigation is still ongoing. The department also said the victim’s identity, although previously confirmed by several friends and family members, would be revealed by the Denver Office of the Medical Examiner.