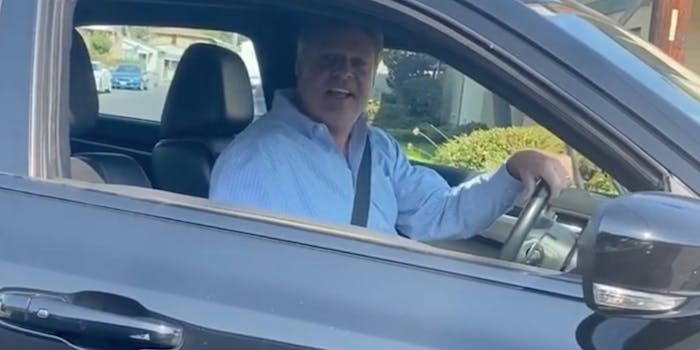 The viral video shows a road rage incident in California.

A white man who allegedly called himself an “off-duty officer” was caught on video hurling the N-word at a Black driver. The video of the incident was posted on Instagram by user @kingofmypride on Monday and has since received more than 6,800 views.

According to the video description, the white man said he was an “off-duty” police officer during an argument on the highway between the two drivers.

“We were driving on the freeway and he tried to speed up to prevent me from getting over, as I got in front of him he sped around me and hit his brakes in the fast lane,” @kingofmypride wrote. “So of course I proceeded to go around him. Then he followed me around and followed me off the exit. Rolls his window down and starts yelling.”

After he yelled back, the white driver reportedly yelled again, “I’ll blow your head off you dumb fucking [N-word].” The user said after he started recording, the white man got on the phone calling for “back up.”

“Like this is happening right in our city yet we have time to be at war with each other,” @kingofmypride wrote on Instagram.

The video begins with the driver behind the camera challenging the white man in the other car that inches forward. “Say it again!”

The man inches the car forward. After a moment, he yells, “You’re a dumb fucking [N-word]!” before driving off.

“Thank you, thank you!” the driver says, and the white man nods as he drives past. The car follows him for a few seconds and zooms in on the license plate.

According to the location tagged on Instagram, the incident took place in El Cerrito, California. The location was typed in Arabic.

After Twitter user @davenewworld_2 shared the video, it received more than 145,000 views. Another user tagged the El Cerrito Police in the post, and the department said the white man in the video is not an employee of the department.

“The person in that video does not work for the El Cerrito PD and is not associated with our dept,” the department tweeted on Monday.

The Daily Dot has reached out to @kingofmypride and will update this report if the user responds.

The Contra Costa District Attorney’s Office told the Daily Dot that it could not confirm if the man is a police officer in the county.