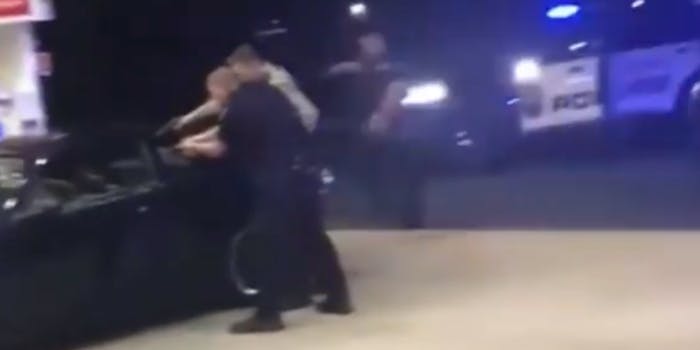 'This is one of the many unjustified things that cops get away with.'

A viral video of police drawing guns on a Black driver, allegedly over his paper car tags, has garnered 14,700 views on Instagram and 995,900 views on TikTok.

The video starts with the driver having already pulled into a gas station, with an officer at his driver side window with his weapon drawn.

Posted to his Instagram, @datboydp_, the driver wrote that he and his girlfriend had been driving late at night Aug. 27, and were “clocked” by the officers who could not see the paper car tag in his back windshield.

“In the specific area we were in as you can see was pitch black dark and unsafe for use [sic] to pull over at so we went to a nearby gas station,” @datboydp_ wrote. “We wanted to protect ourselves so we decided to pull into a well lit area to keep us safe. As soon as we pulled in three cops approached the car and three guns were drawn and ready. Two on me side and one on my girlfriends side. Now My windows don’t go down and in the attempt to tell the officers that you can hear them banging and yelling at the car on the driver side. One of the officers that had a gun on My side (who works for Cabarrus County Sheriffs Department) had a breaking glass pin in his other hand and busted my driver side window, unlocked the car and pulled me out.”

@datboydp_ wrote that the officer on his passenger side also removed his girlfriend from the vehicle, and their phones were taken and placed on top of the car while they were being detained. He also alleges that his Miranda rights were never read, his car was illegally searched, and his ID was not asked for in addition to separating him from his girlfriend.

“They took me to one of their SUVs and questioned me while I watched my girlfriend struggle while handcuffed trying to contact our parents,” he wrote. “My girlfriend was not uncuffed until they started to pulled off with me in the cruiser, leaving my girlfriend at the gas station until parents arrived. This is one of the many unjustified things that cops get away with. Share these videos and pictures to let the rest of the world to see what world we live in. Share this experience amongst your family and friends in thought of helping others know what to do and not to do when it comes to these actions. Help us make sure both the city and the county are held accountable for these misuse of authority and power.”

Commenters have also expressed frustration with the situation, with some critical of the police department’s role in it. Others pointed to the video, which starts after the car has pulled into the gas station and guns have been drawn, writing that without capturing the whole incident, it is missing some context.

“He started recording after the cops pulled [their] guns what happened before the guns got pulled out,” one commenter wrote.

The video was also posted to TikTok by someone who says they are a family member of the driver. Commenters there criticized his actions, in driving to a well-lit area before pulling over. However, pulling into a well-lit area, where a driver may feel safer, is common advice given to drivers regarding traffic stops.

“When they light you up pull over don’t keep driving it’s that simple why don’t people understand this,” a commenter wrote.

Still, others said the officers were unnecessarily escalating the situation by drawing their guns.

The Daily Dot has reached out to @datboydp_, the Cabarrus County Sheriff’s Office and the City of Concord, North Carolina.