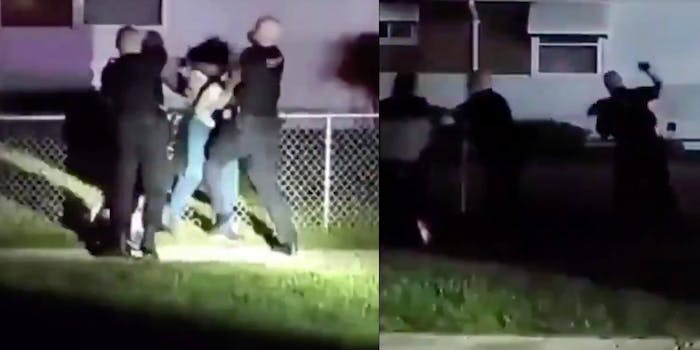 They also tase her husband, who can be seen trying to defend her.

Officers in Michigan have been placed on leave after a video showed one of them punching a Black woman in the head during an arrest, the Associated Press reported on Wednesday.

Jerry Clayton, a Washtenaw County Sheriff, said, per AP, that the incident is under an internal investigation, calling the video “disturbing.”

The incident reportedly took place when Sha’Teina Grady El and her husband, Dan Grady El, did not leave the scene of a shooting that officers were cordoning off. Officers were asking individuals to leave in order to keep them away from the shooter, according to AP.

Videos shared to social media show at least two officers walking up to Grady El and another person, who were standing outside of the fence of a house. The officers start speaking to the two before they disappear behind a parked car. When they emerge, one of the officers is seen carrying Grady El and then punching her in the head.

Many are heard in the background protesting against the officer’s actions. Then, another officer is seen tasing Dan Grady El as he tries to help his wife.

In response to the incident, protesters organized outside the sheriff’s department headquarters, according to AP, and many met with Clayton in his office.

The incident comes amidst nationwide protests against the death of George Floyd. A Minneapolis officer is seen in a video kneeling on Floyd’s neck, as Floyd, a Black man, states that he “cannot breathe.” Floyd later died. The four police officers involved have since been fired and there are now calls for their arrests.

A GoFundMe has been set up to raise bond money for Sha’Teina Grady El.