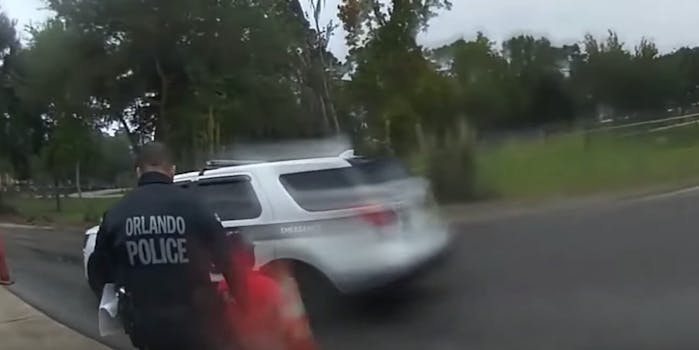 The officer was fired after arresting two minors in one day.

A Florida police officer’s body camera video shows him boasting about his “youngest” arrest after placing a wailing 6-year-old student in a patrol car.

The three-minute video, shared by the Orlando Sentinel, shows officers walking into an office where a child is listening to a story from an employee behind the desk.

“OK she’s going to come with us now,” says the officer with the body camera, identified by the Sentinel as Dennis Turner. “Stand up, stand up!”

“What’re those for?” the child asks.

“That’s for you,” says Turner. Another officer places her hands in zip-ties, and she begins crying.

The child continues pleading with the officers as they walk out of the school, and her cries gets progressively getting louder.

“You don’t want to?” says the other officer, who is not identified in the report.

“No please,” she starts wailing loudly, “I don’t want to.”

The officer calmly puts her in the car while she continues to wail.

The camera of officer Turner then turns towards inside the school where he’s heard speaking with some of the administration.

“If she’s bigger she’d have been wearing regular handcuffs,” he says, and then adds, “The youngest I’ve ever arrested was 7.”

“Six thousand people I’ve arrested,” he says to the school officials, “Seven is the youngest.”

“Six,” says one of the officials.

The incident took place at an Orlando charter school in September, but the body camera footage was only released this week, VICE reported.

Turner was fired after that incident. He arrested another child, an 8-year-old, on the same day.

He charged the 6-year-old with battery for allegedly kicking someone at her school. The 8-year-old received a misdemeanor charge for an unrelated incident.