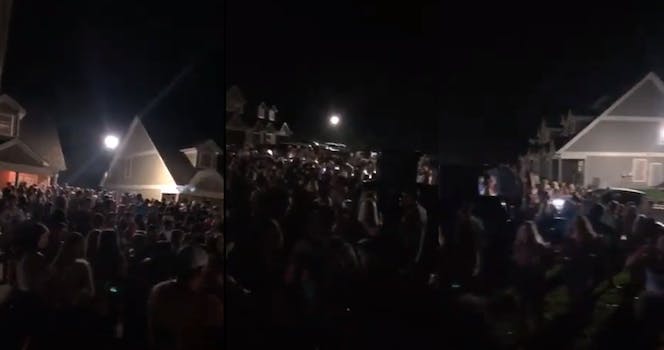 The first day of classes is on Monday.

A shocking viral video has appeared on the net showing young people, including students from the University of North Georgia, partying maskless and in close contact, completely dismissing the social distancing widely suggested in combating COVID-19.

As classes are preparing to begin this morning, students apparently figured they should take in one last rager, which was held near campus in Dahlonega.

The state of Georgia has no mask mandate, and per their guidelines, UNG requires masks only in the university’s buildings and facilities.

On Twitter, @everythinggeorgia posted a video of mostly maskless party-goers enjoying themselves, packing alongside each other in the complex.

“We are aware that a large outdoor party was held at a privately-owned, off-campus apartment complex located near our Dahlonega campus Saturday night,” wrote North Georgia spokeswoman Sylvia Carson in a statement, via Gainesville Times.

Carson continues: “We are disappointed that many of our students chose to ignore COVID-19 public health guidance by congregating in a large group without social distancing or face coverings.”

Viewers of the video had much to say about the partying.

Many expressed anger, including Twitter user @JACKH4MR: “This is why my mom can’t get her breast cancer surgery, the hospitals are dealing with dumbasses like this. If I ran a hospital they’d be mad, CUZ I WOULD REFUSE ANYBODY THAT CAN BE RECOGNISED IN THIS VIDEO!!”

There were reports of other parties in the area on the same night, specifically as a nightclub named Elleven45. A video shared by @eddieacworth, from inside the club, shows a maskless young man throwing money into a congested crowd. All social distancing protocols are ignored in the clip.

The first full day at the University of North Georgia is Monday.

According to channel WRDW, Gov. Brian Kemp (R) recently issued new executive orders with updated protections for business owners and private property. Business owners will still be able to decide whether to have a face-covering requirement for their establishment.