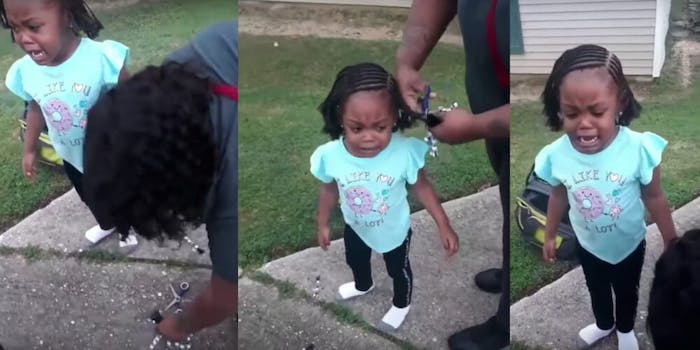 An Alabama mom is coming under fire after a video of her cutting off her daughter’s braids and beads because she didn’t give permission to get the hairstyle done.

In the video, the mother can be heard expressing outrage over the decision to get the girl’s hair braided by someone other than her.

“I don’t care! I told you stop playin’ with me! I don’t care, I do my own daughter hair,” she yells.

According to MadameNoire, the girl’s father decided to take her and her other siblings on a surprise trip to get their hair done since they don’t spend time together often.

“I snuck up on my kids at daycare cause dey momma jayla dnt let me see dem an i took my boys to get dey hair cut an got my bby girl hair did look wat her momma do just cause i got my bby hair did,” the father wrote on Facebook. “Im gucci but my bby hurt but females talk about dead beats dis why sum [N-words] say f*ck dat sh*t an i remind u she also smushed her bday cake on her bday last year.”

Many on social media decried the mom’s actions.

“This is so sad and evil. She really cut this baby hair out of spite,” Twitter user @ToxicTeaghan wrote, sharing the clip.

Another wrote that even though they “despise” their “baby daddy,” they would never hurt their kids to “spite him.”

“I always say love your kids more than you hate you” another user commented.

However, despite facing a ton of criticism online, it appears the mom is standing by her actions. She elaborated on her side of the story in an Instagram Live post, explaining that she liked the style but it was simply too tight.

“It was too tight,” she said. “My baby hair, her skin meat was puffing up between the braids and everything. It was pretty, but it was too tight, and I don’t even braid her hair that tight.”

In a Facebook post, she also ridiculed the girl’s father and reiterated that no one should be allowed to touch their daughter’s hair.

“I dnt need no hoe putting they hands in my daughter hair when I’m a braider myself & just now getting my guh hair to grow!!! This f*ck [N-word] know I even said the Africans can’t get in her head cause they braid too mutha f–kin tight & guh hair was tight as f–k damn right I cut it out,” she wrote.

Many noted that whether or not the mother agreed to the girl’s hairstyle, she responded poorly to the situation and hurt her own daughter.

“All I see is she made her child cry,” Twitter user @thewadeeffect pointed out.