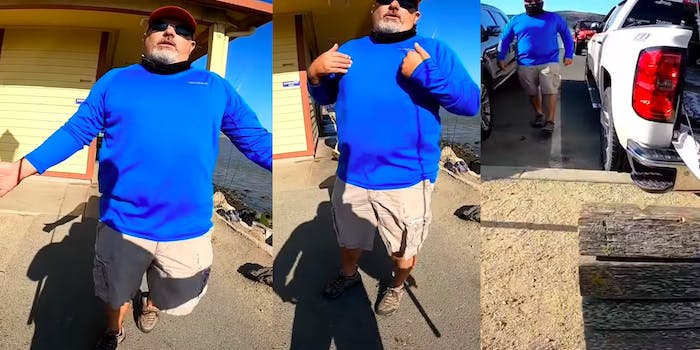 The man later apologized, but the fisherman told him that the video was still getting posted.

A California man tried to force an Asian man and his friends out of a fishing spot that they drove an hour-and-a-half to get to.

Bobby Aperocho drove with his friends from Daly City to Benicia and arrived at the specific fishing spot around 3:30am. The group hung out at the spot until about 1:30pm, waiting for the high tide, when they were approached by Randy and his friend Dan.

“I don’t care if you got here at 2 o’clock or not, this is all our territory,” the man, identified as Randy, says in a video filmed by Aperocho. At one point, Randy, an apparent “local,” tells Aperocho to “go back to your town.”

Aperocho responds by telling Randy to “suck a d*ck” and calling him “Karen” and “Ken.”

Aperocho told Nextshark that he didn’t believe Randy was being racist. In the Facebook post containing the video, Aperocho called Randy “Karen’s husband, Ken” because he had threatened to call the police.

“He was gonna call the cops on us for being there first and not wanting to move because he thinks he’s somewhat entitled,” Aperocho said. “It wasn’t anything about race.”

Aperocho goes onto explain that a couple passing by witnessed the altercation and called the police to deescalate the situation. Once the police arrived, they allegedly explained to Randy that it “was a huge waste of their time coming out for some petty crap.”

Aperocho explained that after the officers left, Randy apologized. Aperocho said he accepted the apology because he just wanted to “enjoy fishing to get away from it all with what’s going on in the world.”

“We shook hands later in the day, but I still made that promise I was gonna post the video,” Aperocho said.

Aperocho said he believes people should stand up for themselves, no matter the situation.

“No one should ever have to experience this. This behavior is absolutely unacceptable for any race and people need to speak up,” he said.