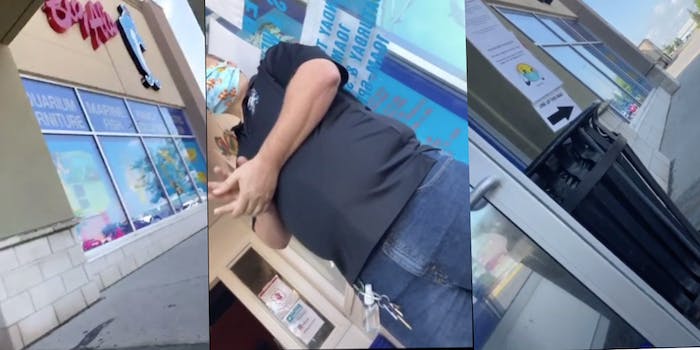 Maskless Karen demands to speak to the manager. Little does she know, she already is

In the video, the woman insists she needs to go inside the store to feel the products.

Another day, another Karen demanding to speak to a store’s manager over mask mandates—only this time, she is dismayed to discover she’s been speaking to the manager the whole time.

A video uploaded to Reddit has the Karen in question already wielding her camera as she approaches the door to the store, clearly ready for an argument. The angle is down low, suggesting she may have been trying to hide the fact that she’s filming the encounter from the store employee who greets her at the door.

She immediately and tersely informs the cheerful employee that she can’t wear a mask, and he lets her know that a mask is required to come into the store but that he would be happy to come up with an alternate solution to help her get whatever she needs.

But Karen is looking for a terrarium and claims she needs to see and touch various options before purchasing anything, an excuse that feels quite possibly invented on the spot in an attempt to push back on the mask policy.

“We’re requiring everyone to wear a mask in the store,” the employee repeats for the third time.

And if the poor employee hadn’t already realized he was in for an adventurous encounter with this particular would-be customer by this point, he certainly has now.

Still, he offers to take photos of all the terrariums in the store for her and bring them out, but that apparently isn’t good enough for the woman.

“And you’re not questioning [corporate policy] at all?” she asks. “Even though masks don’t work? They don’t, actually. Many doctors have come out and said that they don’t.”

“More have said they do, but yeah,” he says.

“No. That’s actually not true,” she claims.

And that’s when she goes full Karen and demands to know if the manager is available.

“That’s myself!” he lets her know.

While this lovely gem of a Karen had previously said she “can’t wear” a mask, this is the first claim she makes of a medical condition. But thanks to the fake medical exemption card scam anti-maskers have been drumming up in recent months, many more store employees have become familiar with the Americans With Disabilities Act (ADA), which requires “reasonable modifications” to a mask policy, including offering curbside pick-up, but doesn’t require private businesses to change policy in a way that would jeopardize the health and safety of others.

The video ends with no resolution to the stand-off.

While anti-masker videos often gain a lot of traction on Reddit, it’s obvious people are getting tired of these Karens and their dreams of public martyrdom.

“Exactly,” u/Cocheeeze agreed. “The manager already explained she can’t come in the store without a mask due to a policy they put in place. There’s not really any good reason for further discussion.”

Another user pointed out the inherent contradiction that often exists in the anti-masker stance. “It is weird how ‘pride’ keeps them from wearing masks but the inability to wear one is always justified by something inherently weak. Like wearing one for 30 mins is going to asphyxiate them or some shit,” wrote u/kokaneebrother.

But u/13Poodle247 perhaps summed up the whole thing best: “Karen: ‘what are they basing that on?’ WE ARE IN THE MIDDLE OF A PANDEMIC KAREN. WAKE THE F— UP!”