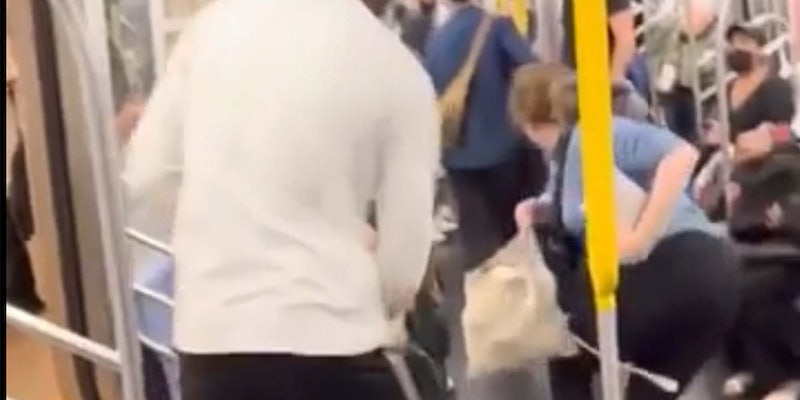 ‘Thanks, men’: Karen attacks Black men on subway, flicks her blood at bystanders

'She was screaming at a random dude on the subway who finally got fed up.'

In a video posted on Reddit on Sunday, a woman yells at two Black men on the subway. They end up physically fighting after she tells them they are a “piece of shit” and “garbage.”

The video shows the woman getting up and hitting one of the men in the face with her iPad. In response, he hits her in the face. She then hits the man over the head repeatedly with her iPad, and he eventually exits the subway car.

His friend then follows him out of the subway, and the woman starts to hit the friend in the face with her iPad. She snatches his backpack, and he grabs it back from her. She grabs it again and spills its contents—food—all over the subway car.

He finally is able to get it back, and she yells that he “got in her face” and is a “piece of shit.” He opens his bottle of soda and sprays it all over her face.

“Fucking broke everything,” she yells with blood on her face.

She then wipes the blood off her face and appears to flick it at the three men sitting across from her.

“Thanks, men,” she yells. “Thank you guys. I’m sure you guys go by the whole thing of taking care of women.”

Commenters on the video deduced that the woman and man she initially hit went for the same open seat on the train. However, in the video, the woman is seen sitting in a row by herself.

Redditor u/Calfer commented that they had seen another, longer version of the video as well.

“She was screaming at a random dude on the subway who finally got fed up and slapped her. Then he booked it out of the train car; a completely different dude walks in who she manages to mistake for the guy who slapped her and she goes off on him,” they commented. “They both happen to be [Black] men, and I guess the first man stood too close to her or something.”

And though many felt bad for the man who lost his entire meal, they applauded his strategic soda spraying.

“Good use of that soda though after all that,” wrote u/anthrolooker.

The Daily Dot has reached out to the user who first shared the video, u/creampieyourself, via Reddit direct message.