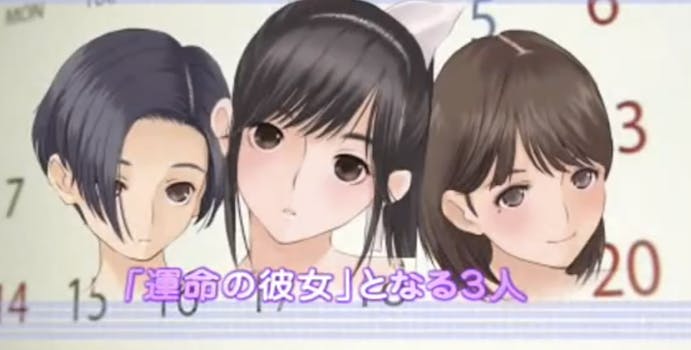 Thousands of Japanese men have a virtual girlfriend named Rinko

A dating video game called LovePlus is a huge hit in Japan.

First, there were sex dolls. Then there were love pillows (slightly NSFW). Now the latest inanimate object to capture the hearts of the Japanese bachelor population is Rinko, the star of Love Plus, a video game that simulates the experience of being in a relationship.

Proving that Her is basically a few Google patents away from becoming a documentary, the Nintendo DS game allows players to form relationships with one (or all) of Love Plus’s three “girlfriends”: Rinko, Nene, and Manaka. According to a detailed write-up of the game in the Huffington Post, LovePlus has garnered a devoted following worldwide, mostly among shy or inexperienced men who use the game as a training ground for a relationship IRL.

“You have — always — this warmth and smile and happiness available at the touch of your fingers,” Phillip Galbraith, an anthropologist studying Japanese culture, says of the game. “It’s the kind of relationship that is instantly rewarding and is always giving. You don’t have to give much to the game and it gives to you every time you turn on the machine.”

Created in 2009 by a Tokyo-based gaming company, LovePlus is set at a high school in a fictional Japanese city. Players assume the role of a teenage boy courting one of the three girls he meets at school: Rinko (a player favorite), Nene, or Manaka. Players earn “boyfriend” points by helping their girlfriends with their homework, or buying them fabulous presents on their birthdays, or taking them on vacation (both virtual and IRL).

Though the girlfriends in LovePlus have specific personalities, their actions seem to be fairly limited: they can only speak a few stock phrases, and any sexual activity with them is limited to first and second base. While HuffPo says the girlfriends are designed to ape “the expectations and idiosyncracies of actual women,” it sounds like the game’s designers have some pretty outdated and sexist ideas about what these idiosyncrasies look like: The women slap their boyfriends when they do something that displeases them, like buying an unsatisfactory present, and blush and giggle when they do something that makes them happy.

There have been three editions of the game (a fourth comes out in January), which have sold more than 600,000 copies worldwide: an impressive, but not staggering, number. Still, LovePlus seems to yield real therapeutic benefits for its users: One female gamer with Asperger’s quoted in the piece says she views her three-year relationship with Manaka as an opportunity to hone her social skills.

However creeped out one might be by the idea of a “virtual girlfriend,” or by the offensive and outdated gender tropes LovePlus reinforces, it’s hard to deny that Rinko, Nene, and Manaka are genuinely helping their boyfriends navigate the dating world IRL—and who doesn’t need a little help with that these days?