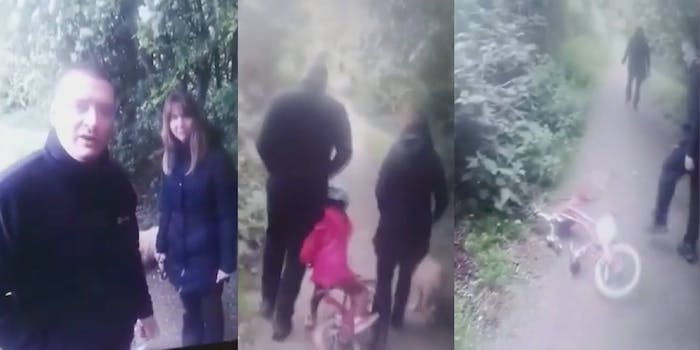 As the couple walks away, the man kicks the bike. They are now blaming the 6-year-old, saying she 'barged' into them.

A couple is alleging they’re not at fault for knocking a child off her bike—saying the 6-year-old “barged” into them.

A video of the incident went viral, with many viewers sickened at the sight of the girl falling to the ground.

Joanne Crampton, the woman involved in the incident, says she’s been “vilified.” The whole scenario was “blown out of all proportion,” she added.

“If anything the little girl was at fault,” she told the Sun. “Not us.”

The child was reportedly riding her bike in Nottinghamshire with her father shouting “excuse me” to Crampton and her husband, Ian, and repeatedly asking the two to move.

Footage shows the girl wobbling as the couple refuses to part. When the girl tried to cycle between them, she falls off her bike and hits Ian Crampton, 46, in the leg.

A man filming the encouter says, “I said ‘excuse me’ several times.”

The girl begins to cry loudly for her father as the couple trots away. Ian Crampton kicks her bike in frustration, too.

The Cramptons reportedly called the police after the incident, fearing a backlash after the video capturing the crash went viral.

According to the Sun, Nottinghamshire Police decided not to prosecute the couple as they believed the incident was a “misunderstanding,” rather than a crime.

We are “very relieved” with the police’s decision, Joanne Crampton says. She blames the girl’s parents for not keeping an eye on their child.

“The video makes us look bad,” she said. “Maybe her parents should have told her not to cycle inbetween us.”