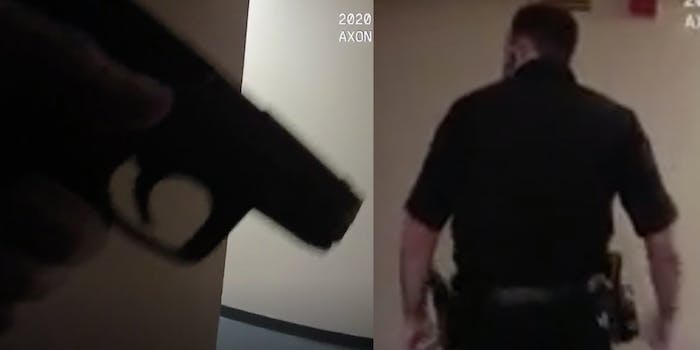 Video shows cop shooting man through door as he screams out in pain, begs officer to ‘stop’

He fired through the door at least six times in a matter of seconds.

Tyler Leibfried and Cory Lindsholm, officers with the Duluth Police Department, responded to a report of a possible domestic disturbance on Sept. 12, 2020, according to Twin Cities. When the officers approached the third-floor apartment unit, they heard two loud noises. They later alleged they believed the noises were gunshots, though an investigation suggests the noises were probably from the occupant of the unit, Jared Fyle, closing a door.

The footage shows the officers seeking cover before Leibfried says “shots fired” over the radio. About 10 seconds after the banging noises were heard, Leibfried pulls out his gun, firing into the door, which had no signs of damage, four times.

Fyle, 23, can be heard yelling out in pain and pleading with the officer to stop. Leibfried fires an additional two rounds into the door. Fyle, along with others in the building, can still be heard screaming.

Leibfried then calls for medical assistance for Fyle.

Before the incident occurred, the officers had already decided that there “did not appear to be probable cause” to arrest Fyle but that they still wanted to speak with him. Leibfried failed to announce himself as police.

Leibfried has since been charged with intentional and reckless discharge of a firearm. The footage was released after his attorney requested to dismiss the two felony firearm charges against him. Sixth Judicial District Judge Sally Tarnowski upheld the charges on Monday.

Fyle still has a bullet lodged in his back and has since retained an attorney, though it remains unclear what legal action he plans to take.