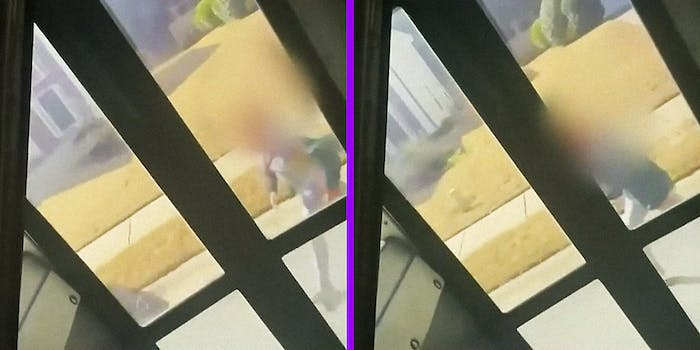 The bus driver has been fired.

A video of a young child running after a school bus as the bus driver drives away laughing was published on Thursday by a North Carolina news station.

The 7-second video was recorded on Snapchat by the bus driver. The clip shows a child wearing a blue jacket and white pants but no backpack while running toward the door of the bus. The bus driver continues to laugh, and the video ends with the sounds of the bus braking.

According to WSOC-TV, the video was sent to the station by a concerned viewer who said the driver works for UpRoar Leadership Academy, a college preparatory school in Charlotte, North Carolina.

Former bus driver Terri Anderson told the news station that “there was nothing funny” about the video. “That’s somebody’s child,” Anderson said.

North Carolina passed a texting ban in 2009 that prohibits anyone, including school bus drivers, from using their cellphone while driving.

The academy released said in a statement to WSOC-TV that said the school investigated the incident and fired the bus driver on Tuesday.

“The safety of our scholars is important to us and we are taking the necessary measures to prevent this occurring again,” the statement read.

The transportation department at the academy will undergo more safety training and reinforce safety guidelines.

UpRoar Leadership Academy did not immediately respond to the Daily Dot’s request for comment.