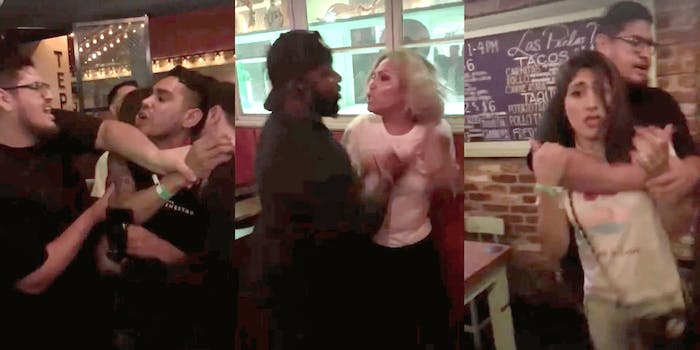 'We didn't want no confrontation but they were being very violent.'

A California bar is getting backlash online after two of its employees were caught in a video dragging out at least three of its customers, one of whom is a transgender woman.

Facebook user Khloe Bienestar shared two videos of the incident on Saturday where waiters at Las Perlas in Los Angeles, California, are seen attacking the customers. The customers were a group of eight employees from Bienestar Human Services, according to CNN. The incident took place during DTLA Pride over the weekend.

A woman named Khloe Rios, who CNN identified as a manager of Bienestar’s transgender advocacy faction, told CNN that eight Bienestar employees were at the bar when a drunk couple started hurling homophobic slurs at them.

“Things like ‘you all are dudes’ get out of here ‘you faggots’ you don’t belong here ‘MEN’ and the worst ‘WE WILL COMEBACK AND KILL YOU!’ Bienestar wrote in the post.

Their group included transgender women of color, gay men of color and a gender non-conforming person, according to CNN. Employees at first asked the couple to back off but the man’s aggression became physical towards one member of the group, and the group tried to protect them.

“We just wanted to protect each other,” Rios told CNN. “We were trying to get them off our backs. We didn’t want no confrontation but they were being very violent.”

Rios said when they called on the bar staff member to handle the situation, they “gently” escorted the couple out while applying force on the Bienestar group. It’s unclear whether Bienestar and Rios are the same person. Bienestar did not immediately respond to the Daily Dot’s request for comments when reached through Facebook on Monday morning.

“At this point and in the chaos, security begun to remove the biological women without any force, and all of us from the community where carried out and thrown outside,” Bienestar’s post continued.

Las night after staff from Bienestar Human Services attempted to celebrate our participation at DTLA proud, we were…

At the beginning of the first video, a bartender is seen fighting and then throwing one person onto another bartender, who is seen throwing the person out. A second waiter is seen forcefully trying to restrain another customer who repeatedly says, “Don’t touch me like that.”

“I need my shoe,” they say, screaming as the waiter slams them to the wall.

The first waiter then puts the customer in a chokehold and forcibly drags them from their seat. The customer asks the camera, “What happened?” before being tossed to a group of bouncers at the door.

The videos, which have been viewed hundreds of thousands of times, garnered angry reactions online.

The Los Angeles Police Department is investigating the incident, CNN reported on Sunday. Although Bienestar said that a hate crime is investigation is underway, the LAPD did not confirm as much but tweeted late Saturday night that “all Angelenos deserve the freedom to coexist in harmony.”

Whether in public, or inside of a private establishment, all Angelenos deserve the freedom to coexist in harmony. Although we cannot comment on an ongoing investigation, rest assured the LAPD will thoroughly investigate the incident at Las Perlas. https://t.co/eUPqvsMdk8

Las Perlas on Saturday evening shared a statement on Facebook that said, “guards removed the guests that were not compliant with the manager’s request to leave and did so in accordance with company policy.”

The post also said the bar managers asked both groups to leave at first and that it would donate profits from Pride weekend to Bienestar’s group.

After the incident, Las Perlas make it to the news seems to have lost some of its loyal customers.

“I’ve been coming to your many establishments for years, Cedd. I even came out in a group with you for one of your birthday parties prior to my transition,” commented one Facebook user on Las Perlas’ apology post. “Watching my sisters treated that way made my blood run cold. Things like this shouldn’t happen anywhere, but especially not in Los Angeles. If this is your company policy, then you need to reconsider whether you belong in Los Angeles (and especially West Hollywood).”

Las Perlas wrote in a follow-up post on Sunday that it’s working with an outside counsel to look into the matter and is further investigating the videos.

“This incident is not in alignment with who we are and our intent is to prove this in action and deed, not words and hyperbole,” the post said.

Las Perlas did not immediately respond to the Daily Dot’s request for comments.