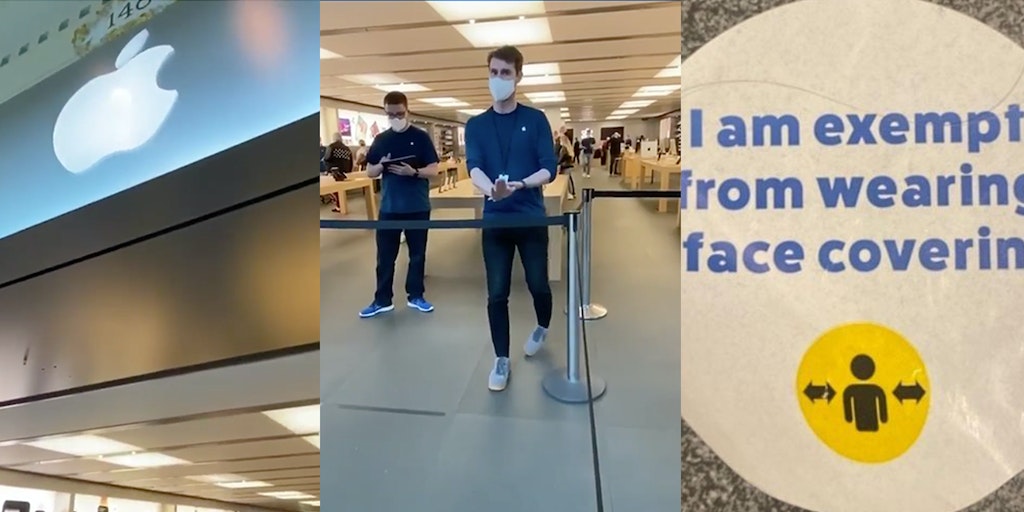 Woman argues with Apple employees over mask, claims her blindness makes her exempt

Viewers don't understand how the two correlate and are dubbing her an 'entitled Karen.'

A woman recorded herself being refused entry into an Apple Store in Manchester because she failed to have on a face covering. The woman claims she is exempt from having to wear one because she is visually impaired, however, people online don’t understand how the two correlate and are dubbing her an “entitled Karen.”

Forty-three-year-old Jeanette Fyfe reportedly made her way to the Intu Trafford Center shopping mall on Monday to seek technical help with her iPhone.

According to the Manchester Evening News, Fyfe was given a “mask exemption” sticker by mall staff for her visual impairment, allowing her to roam the shopping plaza without a face covering. Fyfe said she has been legally blind since 2003.

The video she recorded on Monday shows her arguing with an Apple Store manager when she wasn’t allowed to go in the store for her booked appointment, despite allegedly having permission to enter without a mask.

“I just want to clarify with you, I have made you aware that I’m registered blind, and I’m exempt and you’re denying me access,” she tells the manager, as he reaffirms that she isn’t allowed in by store policy. “I am legally exempt from wearing a mask.”

Fyfe then reportedly left the store and returned an hour later, only to be denied again. Employees reiterated that she must wear a covering to enter.

“They were just unhelpful right from the start. I asked someone for help booking the appointment because of my eyesight and they just brushed me off,” said Fyfe, according to Mirror. “I told them I was exempt and that I don’t wear masks because it makes my eyesight worse. I had the sticker on that the Trafford Centre gave me to prove this.”

She said employees told her that the “Apple store was private land and they were refusing me access unless I wore a mask.”

Apple’s rules listed outside of the store state that the number of people allowed in is limited and that all customers are asked to wear a mask of some sort.

Government ordinances aside, according to the Apple Store’s manager, the company has the right to refuse service to anyone without a mask since the property is on “private land,” Mirror reports.

“I paid over £1,000 for that phone and I can’t even use it. It’s just astonishing. I am in total disbelief at the arrogance of their attitude,” said Fyfe. “What I don’t understand is how the Trafford Centre can give me a sticker saying I am exempt but I cannot go into the Apple store.”

“Lol, I dont understand her point. Wtf does being blind have to do with a face mask?” one viewer wrote after watching the video on Reddit.

A spokesperson from the Trafford Center told Mirror that the center is aware of the claims made and is allowing Apple to handle the investigation. They stated that despite general guidelines, each storefront within the center is responsible for managing its own protocol when it comes to social distancing and mask-wearing.

“As per Government’s guidelines, anyone who comes into the centre will need to wear a face covering, unless exempt,” they said, further emphasizing that the center “fully support(s) anyone with a physical or hidden disability” and that it has “a number of provisions in place to support the needs of any visitor who may require additional support,” including mask exemption stickers.