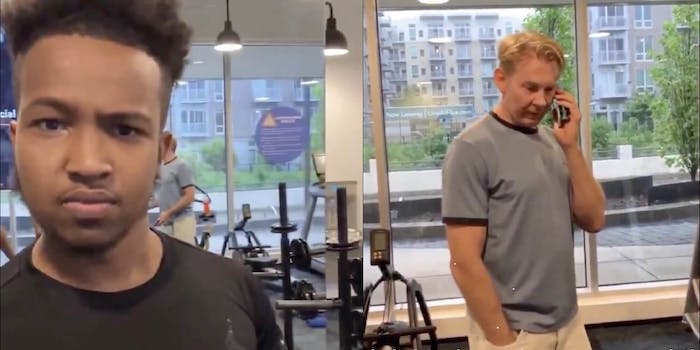 The men work in the building.

A viral Instagram video shows a white man threatening to call 911 on a group of Black men who were using a private gym. The men say they work in the building and were racially profiled.

Social media consulting company Top Figure shared the video on Tuesday. According to the caption, the group went to a private gym accessible to tenants by key card and were immediately approached by Thomas Austin, who asked if they “belonged” in the building.

“Granted we’ve been in this office space and have rented and grown our business for the past 1 year and half here,” the caption said.

Addi Hassan, who owns the company with Salman Elmi and Zak Ahmed, said Elmi and Ahmed were in the building with two employees before Austin entered. After Hassan entered the building to join them, Austin began questioning them.

In the video, Austin, the CEO of a venture capital and private equity firm, asks the men if they are tenants in the building and what floor they are on. One man said, “Don’t worry about that, we don’t have to tell you.”

“This man demanded that we show him our key cards or he will call the cops on us,” the video caption said.

Austin said in the video he was “calling 911 now,” but said in an emailed statement he called building security. Neither Minneapolis police nor building officials at the MozaicEast immediately responded to the Daily Dot’s requests for comments.

“There’s a whole bunch of people here who don’t appear to be part of the [building],” Austin said in the phone call on the video.

Hassan said after the janitors confirmed that the men were tenants of the building, Austin “realized he messed up big time.”

“That’s when he started backpedaling and started to resolve it, but it was kind of too late the damage had already been done,” Hassan said. “We were racially profiled and got threatened to call the cops on. As you see what’s going on with America, as a Black person when you get a threat of getting the cops called on, that’s essentially as big as a death threat.”

Hassan said Austin tried disingenuously to apologize in the gym, and after a building owner tried to connect Austin with the group to apologize, Austin denied any wrongdoing.

“Should have handled it differently,” Austin told the Daily Dot in an email. “Several of these guys were trespassing and using a private gym that was authorized only for building tenants. Looked like one of the tenants brought 4 friends and I complained to them that this isn’t right and it’s unfair to the tenants who pay. They got in my face in a very threatening manner and I threatened back … I would have done this regardless of race.”

In 2017, Austin made local news because he opposed renaming a lake originally named for a slave owner.

The video of the gym incident had more than 11,000 likes by the time of publication. The video was also reposted on Twitter by @anisalrh where it has over 58,600 likes and 22,200 retweets.

Top Figure’s caption said the men don’t normally post about instances like this but “are sick and tired of tolerating this type of behavior on a day to day basis and we feel that we had to bring light onto this situation.”

The post comes amid protests over a viral video showing George Floyd, a Black man in Minneapolis, pinned to the ground at his neck by a police officer. Floyd later died.