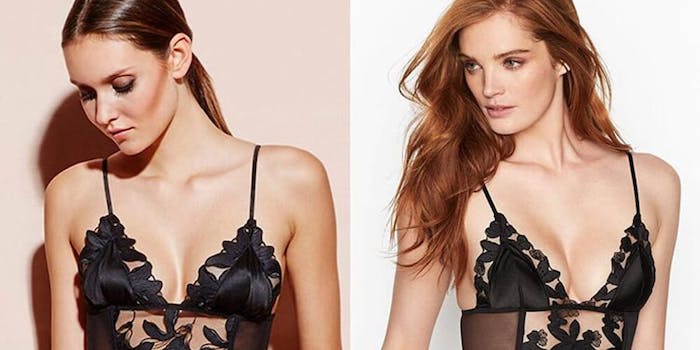 An independent fashion designer has accused Victoria’s Secret of stealing her designs, adding to a series of recent controversies around the popular lingerie brand, Jezebel reports.

A year after leaving her role as design director at Victoria’s Secret in 2011, Jennifer Zuccarini struck out on her own, launching lingerie line Fleur du Mal. The brand has quickly risen through the ranks of lingerie fashion, with a focus on empowering women to wear undergarments that make them feel sexy without needing a date to show off for.

In an interview with the Wall Street Journal, Zuccarini said she first became aware of the rip-offs of Fleur du Mal’s popular Lily collection—which features unique silk embroidery designs—when a customer sent a link to the Victoria’s Secret page advertising the look-alikes.

Zuccarini also said she suspected this was going to happen because six months prior, an associate buyer for Victoria’s Secret bought $12,656 worth of clothing from Fleur du Mal, about half of which was from the Lily collection.

With Zuccarini’s blessing, Fleur du Mal employees sent the evidence, including the receipt and the buyer’s LinkedIn, to the fashion industry watchdog Diet Prada on Instagram. Even when placed side-by-side, the lingerie looks almost exactly the same. Of course, the Victoria’s Secret version comes at a much lower cost and from far less ethical production than Fleur du Mal, which sources its fabrics directly. Zuccarini also noted the difference in quality, saying to the Wall Street Journal, “We trim ours with silk; theirs is polyester.”

Even though they certainly have a legal basis to sue Victoria’s Secret, Fleur du Mal is a small company, and Zuccarini says she’s not pursuing legal action due to the cost. “It’s such a costly path to go down, and we could invest $50,000 in a case that might not go anywhere,” Zuccarini said. “What are we supposed to do? The answer couldn’t be, do nothing. That’s why we wanted to talk about it.”