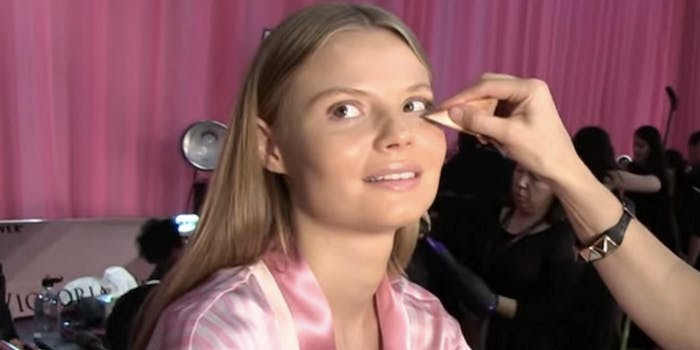 She was having none of it.

It’s always satisfying to see aggressive TMZ reporters put in their place, and this time it was a model who deftly called one out. Magdalena Frackowiak had a camera shoved in her face backstage last night at the Victoria’s Secret Fashion Show, and quickly lost her patience when she was asked about food—or lack thereof.

“What are you most excited to eat after the show?” The reporter bluntly asked a number of the models. One said she looked forward to some Half Baked Ben & Jerry’s ice cream, while another said “pig food, like pizza.” But when Frackowiak was asked, she offered a quick eye roll, called the question “stupid,” and said it made her look like an “idiot.”

The whole, beautiful exchange can be seen around the 45 second mark:

It’s no secret that there’s immense pressure on models to maintain “perfect” bodies by not indulging in foods that us normal people enjoy. A popular Australian model Essena O’Neill recently announced that she was quitting modeling and social media because of the immense pressure put on women to look a certain way.

But not all models subsist on rabbit food: New Zealand model Nela Zisser gained attention earlier this year for scarfing down a baby-sized burrito. We’d like to see TMZ hit her with the same question.

The Victoria’s Secret Fashion Show will air December 8 on CBS.