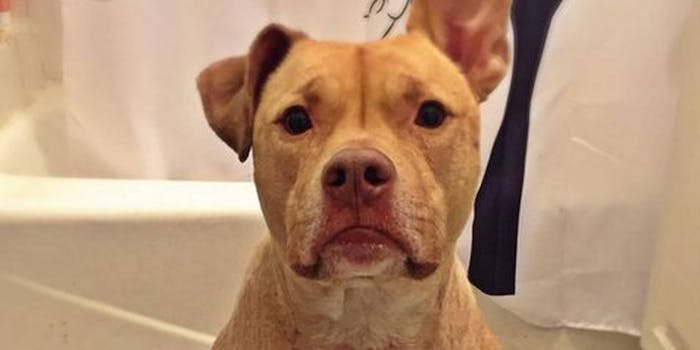 Forget ‘vegan Bernie Madoff,’ what happened to her adorable dog?

Sarma Melngailis' Twitter-famous pup hasn't been heard from in a while.

Over the weekend, the New York Post broke the story of “the downfall of New York’s hottest vegan,” Sarma Melngailis. Melngailis was the owner of Pure Food and Wine, a raw, vegan restaurant in Manhattan’s Gramercy Park neighborhood, and the owner of raw, vegan, and gluten-free snack service One Lucky Duck.

Now, she and her husband are charged with 24 counts of theft, labor fraud, and tax crime. But there’s one question about her new life as a criminal (aka the “vegan Bernie Madoff”) that has yet to be answered: What happened to her dog?

I sit side saddle. pic.twitter.com/7De8f4QAb4

@oneluckypuppy just saw report of your mother's arrest. Hope you are in good hands and well taken care of.

does anyone know what happened to her dog @oneluckypuppy??? I hope he is safe:(

Melngailis’s Twitter page links to that of @oneluckypuppy, aka “Leon Quinn Trujillo.” The last updates on both pages are from about a year ago. Back then, Leon looked like he led a pretty good life, hanging out at the restaurant and giving his owner lots of kisses.

Leon’s Facebook page doesn’t give much more information, only that by late last year, people were beginning to worry about his whereabouts.

We’ve reached out to One Lucky Duck to see if anyone there has any leads, and to the ASPCA to find out if there’s a protocol for what happens to inmates’ pets. Until then, Leon, we hope you’re safe!