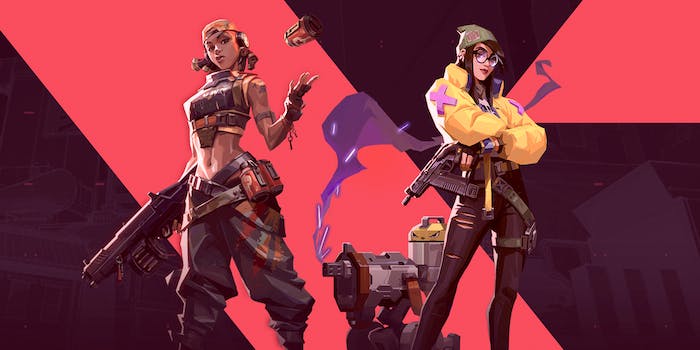 Are Raze and Killjoy flirting in German?

Riot Games’ first-person shooter Valorant has a new playable character, and some fans are speculating whether she has a girlfriend.

German engineer Killjoy was added to Valorant last week as the game’s sixth female agent. Her gameplay style mostly revolves around deploying turrets for a defensive advantage, and her personality reflects it. She’s a mellow tech genius with a knack for big glasses, hipster fashion, and a tongue-in-cheek request to wipe her hard drive if she dies.

Killjoy is the exact opposite of one of Valorant’s first female player characters, Raze, a Brazilian explosives expert. Whereas Killjoy is cool, collected, and a bit of a nerd, Raze is a bombastic and intense DIY girl more interested in listening to music on the battlefield than debriefings and tactical planning. So, naturally, wouldn’t these two weapons experts end up in love? On Wednesday, Valorant concept artist Anh Dang gave fuel to the idea after she shared an image of Killjoy and Raze working on tech together. In the illustration, Raze seems to be enjoying her hard work as Killjoy glances over with a flirty gaze.

“Do you think like…Killjoy and Raze work on stuff together,” Dang added, complete with the all-too-sapphic pleading emoji (🥺). Her post went viral with over 4,300 likes and hundreds of retweets.

On Thursday, artist Stephanie Baltodano shared four fan art images of Raze and Killjoy together with the caption “Killjoy and Raze are dating, I don’t make the rules.”

While there’s plenty of chemistry for a Killjoy x Raze headcanon among fans, some suspect the two women are more than just a fantasy ship. Based on a series of in-game lines from Killjoy directed at Raze, the two appear to have an intimate relationship. Three different voice lines serve as character development for their connection with each other, including one line in which Killjoy begrudgingly admits Raze’s “tinkering” has improved her work and a second in which Killjoy says in a serious tone, “Be safe, Raze.”

The strongest argument for Killjoy and Raze dating lies with a third line where Killjoy calls her fellow agent “freundin.” “Freundin” means “girlfriend” in German and, like English, the word has two meanings: “female friend” and “girlfriend,” per Wiktionary. The line comes across as more of the latter than the former, given Killjoy says “Raze, freundin” slowly and intimately.

Is it heavy-handed? Sure. But this only reinforces the theory. Nyalruko, a native German speaker and queer woman who plays Valorant, suggests that Riot used “freundin” as a heavy-handed attempt to imply that Raze and Killjoy are lovers because “freundin” literally translates to “girlfriend” in Google Translate. Notably, Killjoy’s German has received criticism from Valorant fans for sounding inauthentic.

“I think the biggest problem is even outside the hilarious German her voice lines feel a bit flat?” Nyalruko told the Daily Dot. “On the other hand, the ‘freundin’ line sounds like the biggest smoking gun to me. The delivery is suggestive … The fact ‘girlfriend’ is directly translated with ‘freundin’ kind of makes it obvious which angle they approached it from.”

If it’s real, Killjoy x Raze (Killze?) would probably benefit from some German lessons. Nyalruko suggests the studio replace “freundin” with “liebste” or “schätzchen,” the German equivalents of “sweetheart” and “darling.” Or Killjoy could refer to Raze as “Bömbchen,” a “cuteified” term for “bomb” in German, she told the Daily Dot.

“But the best would be if Raze clearly reacts to [Killjoy’s lines as flirting],” Nyalruko said. “Like if Killjoy throws some awkward pickup lines because we are all disasters and Raze is just ‘Oh you I get what you want to say.’ That would really hit the nerve.”

The Daily Dot reached out to Riot Games for comment.