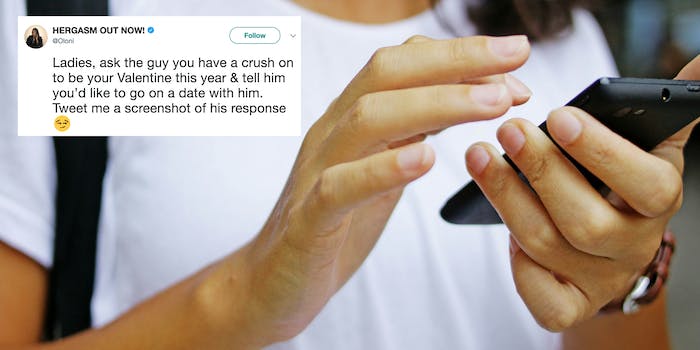 You never know unless you ask.

In 2018, the archaic rules of dating no longer apply. Women already know that waiting for a man to make the first move will only end in disappointment, so this Valentine’s Day ladies have taken matters into their own hands.

Sex toy creator and blogger Dami Olonisakin encouraged women on Twitter on Feb. 5 to ask a guy they have a crush on out for Valentine’s Day and then tweet her a screenshot of their responses. As BuzzFeed noted, tons of women were up for the challenge.

I've never been so anxious in my life, was melting with sweat!! pic.twitter.com/81NdBF4Ikg

The results proved that it never hurts to ask—many women received positive responses—and men seemed generally taken aback to be courted for once. Of course, a few propositions were squelched, but now those women can move on with their lives and on to someone who will appreciate them.

This Valentine’s Day, go ahead and give yourself the gift of ridding your life of sexist gender norms for good. If these tweets are any indication, you won’t regret it. And if you do, you might at least get a laugh out of it.