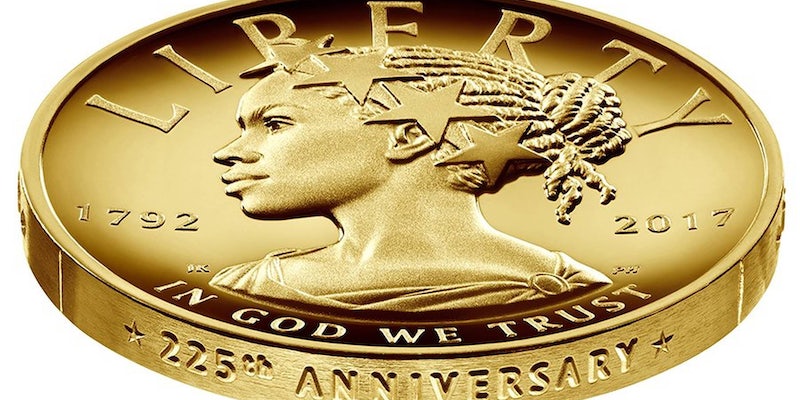 Lady Liberty is a fictional character.

The U.S Mint released released a coin in honor of its 225th anniversary. The American Liberty High Relief Gold Coin features Lady Liberty in profile wearing a headband of stars, her hair tied up in a bun with a few stray braids falling down from it.

But a lot of racists are mad at the coin because, for the first time, Lady Liberty is black.

While it is very nice, I am a bit confused by why it does not resemble our Lady Liberty as we traditionally know her.

On Twitter, the U.S. Mint explains that the coin is the first in a series, and that the “designs depict an allegorical Liberty in a variety of contemp. forms reflecting U.S. diversity.” In the unveiling ceremony, U.S. Mint Chief of Staff Elisa Basnight said the coin represents the “evolution of Liberty.” In an interview with KSL, principal deputy director of the Mint, Rhett Jeppson, said, “If we see [ourselves] in that and it speaks to us, that’s really powerful and it makes us feel inclusive.”

Others have argued that a black Lady Liberty is “cheap symbolism” at a time when black people earn less in America. But the depiction of Lady Liberty, a fictional character that can be represented however an artist wants her to, has been met with anger by people who insist that her not being white is some sort of atrocity.

Coin World’s Facebook page has been flooded with racist comments, and William Gibbs, its managing editor, told Philly.com “If you were a young black woman happening upon the Coin World Facebook page, how would you feel if you saw so much vitriol directed at a coin design showing someone who might look like you? You probably wouldn’t stick around.”

The new gold coin is a collector’s item, so you won’t be getting a pile of them as change. But along with the new $20 featuring Harriet Tubman, it’s another step to make our money represent America’s population.