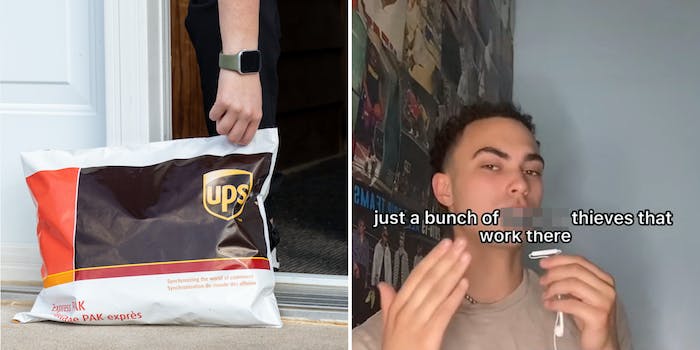 'No wonder I never got my iPhone.'

TikToker @aidanfull3r posted a clip where he claims that he witnessed all types of theft from fellow employees while working at UPS. According to Aidan, employees were opening up packages and coming up with creative ways of stealing their contents. He went on to say that the problem is so widely recognized by the company that they routinely check employees’ bags and clothing, and even have workers walk through metal detectors to ensure they aren’t walking out of the facility with stolen items.

In the comments section, the creator clarified that “THIS IS A FICTIONAL STORY ANY IDEAS, PERSONS, DIALOG are MERELY COINCIDENTAL AND NOT TO BE TAKEN IN THE LITERAL SENSE.” However, many other viewers remarked that they thought he was saying that as a means of precluding himself from getting into any legal trouble with the delivery giant.

In the clip, he says, “I used to work at UPS. Believe it or not, the best part about UPS is all the free stuff you get once you’re hired.”

He then relays a time when he allegedly witnessed a co-worker steal a brand new iPhone X by hiding it facedown in his shoe, thereby bypassing the metal detectors on his way out.

Some commenters shared their own UPS delivery horror stories, like how they received notice their items made it to a facility but then disappeared. Others thanked the creator for telling them where to work, while others said that they worked at UPS and saw firsthand how poorly some of the packages were treated when it came to sorting. And then there were some who wondered what kind of security measures the United Parcel Service Inc. is (or isn’t) taking in order to curb employee theft.

“Bruh don’t tell me this after my phone was ‘out for delivery’ and didn’t get delivered,” one user commented.

“One of my leads got fired cause he got caught taking a pair of shoes,” another claiming to be a UPS employee wrote.

“Aren’t there any cameras inside?” another viewer asked.

“So basically I should work at ups?” one user joked.

“Once had a 400-dollar shoe get stolen from me it made it to the facility and then disappeared,” a viewer claimed.

There have been documented instances of UPS workers confessing to stealing packages in the past. In 2019, a seasonal worker admitted that he stole electronics customers purchased and had delivered through the parcel service.

In the same year, an Amazon delivery driver was arrested for taking packages instead of bringing them to people’s homes. Some even employed other methods, like marking the delivery as completed and then taking the packages anyway so as not to arouse suspicion.

Package theft statistics from 2020 reveal that there was a marked increase in the number of pilfered deliveries from 2019 to 2020: 36 percent and 43 percent respectively. Of the 43 percent who’ve had deliveries swiped away, 64 percent of that demographic said they’ve had their purchases robbed more than once.

The Daily Dot has reached out to the creator via TikTok comment and UPS via email.