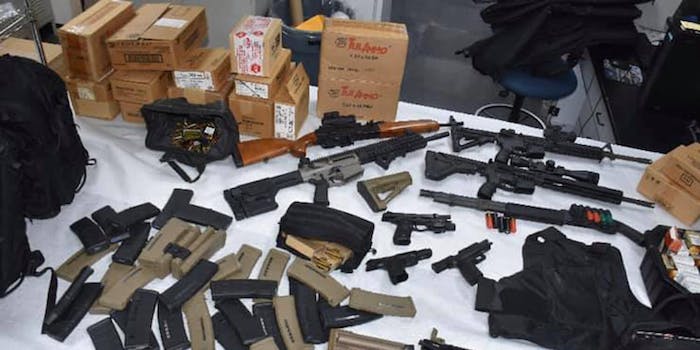 'I definitely think we avoided a tragedy.'

California police say a UPS employee was arrested on Sunday after threatening a mass shooting at the company’s Sunnyvale location.

Authorities searched 32-year-old Thomas Andrews’ apartment and found more than 20,000 rounds of ammunition and several firearms, according to the Sunnyvale Department of Public Safety.

Authorities searched for Andrews after UPS reported that Andrews sent threatening text messages to his employer on Sunday night. When Sunnyvale patrol officers spotted his car, they attempted an enforcement stop, but Andrews kept driving for several miles.

Andrews surrendered after leading the officers in a vehicle pursuit down U.S. 101, according to Capt. Dan Pistor.

According to the Associated Press, Pistor said Sunnyvale avoided a tragedy.

“He alluded to a mass shooting in his text messages,” Pistor said. “I definitely think we avoided a tragedy.”

“We are fully cooperating with law enforcement as they conduct their investigation,” Matthew O’Connor, senior manager of UPS, told the Daily Dot.

Pistor said Andrews was upset with his employer, but Pistor said he didn’t know the specifics of his grievances, according to the Associated Press.

Pistor said the investigation is ongoing.