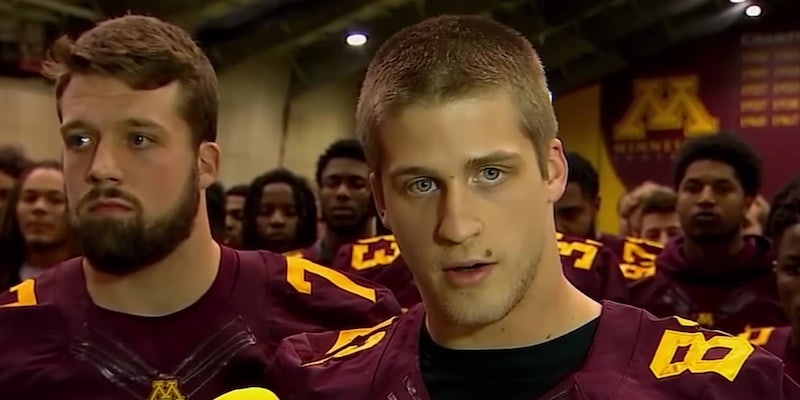 This happened after reading the university's report on the alleged sexual assault.

The University of Minnesota football team has ended its boycott threat following the suspension of 10 players due to sexual assault allegations. According to NBC News, the team agreed to participate in the upcoming Holiday Bowl game vs. Washington State upon reaching agreement on “other conditions,” but the 10 suspended players will remain suspended, pending an appeal from an attorney representing them.

On Sep. 2, a female student at the university filed a police report alleging she’d been raped by a number of players in an off-campus apartment.

No charges were ultimately filed over the incident, with the Hennepin County Attorney’s Office citing a lack of sufficient evidence. But during a court hearing, the woman testified that she had sex with one player while drunk and feeling trapped and fearful. Subsequently, she saw several men lined up to assault her.

Though the team set out to boycott the bowl game because of the suspensions, the Minneapolis Star Tribune reports that the “narrative changed” when the team actually learned the contents of the university’s 80-page long report on the incident.

According to the newspaper, her memory of the incident was clouded, but she recalled about “a dozen men” being involved, with her “shoving people off” while the group “laughed” and “tried to cheer people on.”

She reportedly told police she was sexually assaulted by three of the players, and in total, law enforcement reportedly said that six players were involved in the incident. Why the other four were also suspended is unclear, but following the news, the team members insisted they would boycott their upcoming nationally televised bowl game unless all were reinstated.

The boycott threats stoked national outrage from many sexual assault survivors and advocacy groups and sparked protests around the university.

Speaking to the assembled press on Saturday, wide receiver Drew Wolitarsky announced the team would not boycott the Holiday Bowl as promised, acknowledging that after meeting with the university’s president, Eric Kaler, it became clear that the suspensions would not be overturned.

We would like to announce that we are ending our boycott, and we will immediately begin preparations for playing in the Holiday Bowl. As a team, we understand that what has occurred the past few days, and playing football for the University of Minnesota, is much larger than us. We ask that you now, the members of the media, our fans, and the generic public, hold all of us accountable for ensuring that our teammates are treated fairly, along with any and all victims of sexual assault. We also ask that the public dialogue related to the apparent lack of due process in the university system is openly discussed and evaluated, and we hope that our fans and the university understand why we took the actions that we did.

Wolitarsky’s remarks also touched on the state of sexual violence on campus, stating that “sexual harassment and violence against women have no place on this campus, on our team, in our society and at no time is it ever condoned.”

The university report detailing the alleged assault was obtained and released by KSTP. Be forewarned, however; it describes deeply disturbing details of the allegations. If you want to read it for yourself, you can do so here.