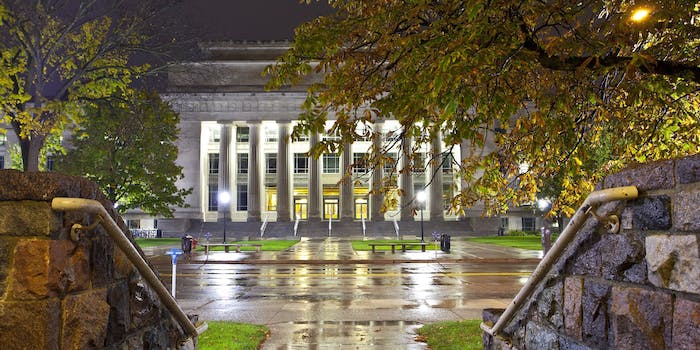 It's not the first time the driver and the student have met.

The University of Michigan said Sunday that it was “extremely disappointed” with a student caught on video berating an Uber driver.

The March 20 incident went viral after the driver, Artur Zawada, posted it online and filed a complaint on March 23.

“We have seen the video,” University of Michigan spokesperson Rick Fitzgerald told the news site The Tab. “Our dean of students has talked with both the Uber driver and the students. We are extremely disappointed in the behavior depicted in this video. No one should be treated with such disrespect.”

Zawada, who had driven the student before, began filming as the young man launched a homophobic, expletive-laced rant. The student, who grabbed his phone and began filming as well, was demanding to know why his ride had been canceled.

Zawada told The Tab that he knew the passenger from previous negative encounters and couldn’t handle another one.

“I already told him I would never take him again,” he said. “He knew that but he didn’t cancel the trip. I pulled in I didn’t even say anything to the guy, and that happened. So I pulled out my cell phone and recorded him. He should just have cancelled before I came over. They were looking for trouble. They were hoping I would lose my cool.”

The Michigan Daily later identified the student as Jake Croman, a member of the Tau Kappa Epsilon fraternity. TKE is currently investigating the incident, with chief information officer Alex Baker expressing his disappointment, but the fraternity didn’t mention Croman by name.

Croman told BuzzFeed that Zawada had made anti-Semitic remarks in the past and alleged that the driver had discriminated against him because of his religion. Croman has also filed a complaint with Ann Arbor police.

“This video shows one side of an argument I had with an Uber driver two weeks ago after he refused to pick me up on the basis of my religion,” Croman said in a statement to the site. “What you don’t see in the video is that the driver had made a number of offensive anti-Semitic remarks that provoked my response.”

“I am not proud of my reaction to his discrimination and I regret my choice of words,” he continued. Shortly after the verbal altercation, I filed a complaint with the Ann Arbor police department and they are now dealing with the issue.”