It's quite the sizzling scandal.

Las Vegas: a city where a fake church devoted to cured meats can argue that it’s the victim of religious discrimination.

Much like the Church of the Flying Spaghetti Monster, the United Church of Bacon is a church of skeptics and atheists that serves up not-so-tongue-in-cheek commentary about the nature of religious worship. (Noted skeptic Penn Jillette is the church’s “Sunday school teacher.”)

The church provides free, legal wedding services for skeptics of all stripes who’d rather not have God as a third wheel at the altar. The church’s “about” page captures its aim nicely:

Are you tired of religious people being seen as morally superior to atheists? Of religions getting special privileges in the law, because they’re perceived as better than secular non-profit organizations?

As a protest, atheist friends of magician Penn Jillette of Penn & Teller had a fantastic idea in 2010. Let’s start a real, legal church with a funny name, and then demand the same rights as mainstream religions.

The church has nine “commandments,” as outlined on the tablets below: 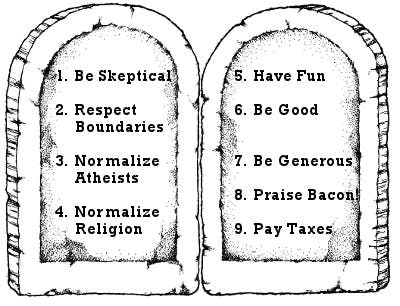 It also has a pretty great billboard:

Like most religions worth their salt, the Church of Bacon is trying to spread awareness of a great evil in the world: Wells Fargo. The church is accusing the American banking institution of religious discrimination after a Wells Fargo employee declined to notarize an affidavit that would allow one of the church’s congregants to officiate a wedding. According to the bacon-thumpers, the bank’s stance discriminates against atheism, which qualifies as a religious view.

Though he was eventually able to get the affidavit notarized at a second Wells Fargo location, church member John Whiteside closed his own account with the bank and started a petition against Wells Fargo, which has garnered more than 700 signatures.

In response to the outcry, Wells Fargo has issued the following statement:

“Wells Fargo believes discrimination of any kind and against any group or customer base is wrong and we categorically deny the claims brought forth by Mr. Whiteside. We have a long history of supporting and serving the needs of a widely diverse customer base in Nevada and throughout the country. We regret that this organization and Mr. Whiteside have decided to target Wells Fargo as a means to further their agenda.”