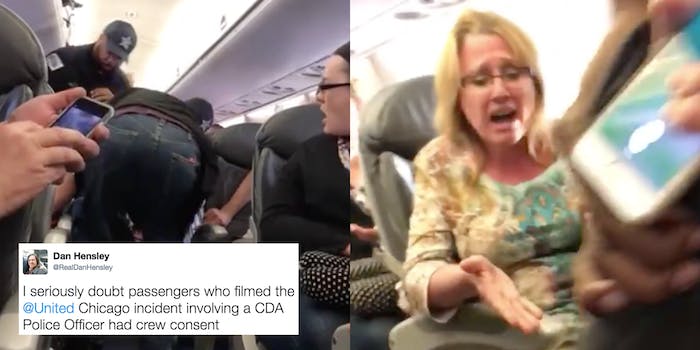 'Why aren't the passengers who filmed the incident...not in FBI custody?'

Very few defenders have come out in support of United Airlines after a video of police dragging a man off a plane went viral Sunday night, but they exist, and their takes are…something.

Take, for example, this extremely nuanced but misguided point from Dan Hensley, a Chicago journalist, arguing that the people who recorded the altercation broke not just federal law by recording on an airplane, but also United’s policy against on-plane filming by failing to get consent of the crew and other passengers.

Essentially, Hensley is arguing that the company should prosecute the passengers for recording Chicago Department of Aviation officers dragging a man off the plane—instead of taking responsibility for its own civil rights violations by forcibly deplaning a passenger and bloodying him in the process. I mean, the passenger also didn’t give consent to be violently dragged from his seat, but I guess that’s worth overlooking just to note that the company was in the wrong.

Following Hensley’s argument is a tad complicated, to say the least. Though the FAA and DHS may have jurisdiction, as he says, it would appear that most photography and videography aboard a plane follows the rule of public versus private property. Filming a TSA checkpoint isn’t illegal—it’s being conducted on public property. But according to Condé Nast Travel, it seems that inside the plane, the airline is in charge of policing and enforcing photo and video policies.

But, just because it’s a company’s policy, it doesn’t make it right. Tens of outraged tweeters replied to Hensley, telling him he’s being kind of awful for siding with a company that said it had no other choice but to drag the man off the plane, rather than maybe admit it made a booking mistake and attempt to get its crew to their destination by another means.

This is one of the stupidest things I've seen.

Really glad you're worried about the big picture here. It's definitely the fault of the person who took the video.

Like any hot-take hero hellbent on proving that they are indeed correct about their POV, Hensley later Twitter-ranted over how ballistic “the left” had become toward his insistence that recording on a grounded plane was more problematic than a passenger getting slammed into an armrest by police before getting dragged up the aisle by his limp arms.

Surely, Hensley understands this, but just in case: When it comes to a company decision that results in a man getting bloodied and forcibly deplaned for the benefit of the company, you can pretty sure that people who stand for human rights probably aren’t going to appreciate an opinion that the company’s policies were violated in the process of revealing the injustice.