Turn all photos of Facebook babies into adorable cats Babies—someday you’ll love ’em. For now, you’d rather do without ’em.

And despite your attempts to keep ’em clear on out of your independent, 20-something life, those babies just keep on coming back, crawling on hands and news in bright pastels, straight into your social newsfeeds.

Now there’s an app for that—or rather a plugin.

Unbaby.me, a Chrome plugin developed after a round of drinking by Tribeca trio Chris Baker, Peter Marquis, and Yvonne Cheng, will replace any baby photo that shows up on your newsfeed with a Instagram RSS feed-provided photo of a cat. Think of it like Nickelblock for babies—and then try to figure out which of the two would be worse.

“The baby thing just got out of hand,” Baker told the Daily Dot.

“That’s why we felt the need to call it out. The behavior of wanting to shove your kids’ pictures down peoples’s throats is as old as time itself––it’s just now we’re all connected and have to deal with certain things on a near constant basis. For most people, having a kid is their great accomplishment in life. We get it. And we knew it was a problem nearly everyone could relate to.

“Let’s just be thankful we don’t take constant pictures of all the things that come out of our bodies.” 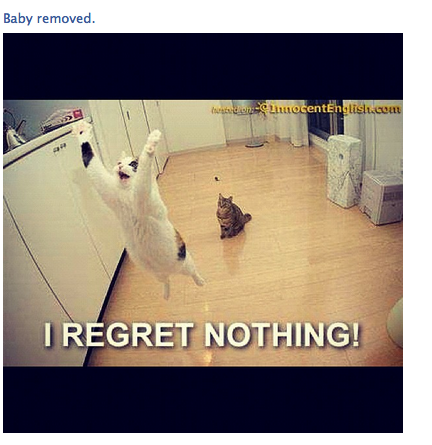 Installing Unbaby.me is simple: Press the big “Add to Chrome” button and then click on the blue Unbaby that pops up in your Chrome toolbar.

From there, you can adjust the keywords that Unbaby will filter out so that the plugin is working most appropriately with what your Facebook friends are posting.

The plugin’s set to automatically keep an eye on phrases like “year old,” “so adorable,” “our family,” cutest baby,” and “learned to walk,” but users are free to add whatever terms they see fit: “poop stained diaper,” “holy crap, i didn’t sleep at all last night,” “this little turd just spat up on my brand new Oxford shirt.” Whatever you want, really.

We now patiently await the day when someone comes out with a plugin that will turn all these cats into Nic Cage.